(ATTN: UPDATES with more remarks by Rood in last 8 paras)
By Lee Haye-ah

WASHINGTON, Jan. 28 (Yonhap) -- A senior U.S. defense official on Tuesday voiced support for a peace declaration between the United States and North Korea, saying such an agreement would be beneficial to Washington if it can be negotiated.

John Rood, under secretary of defense for policy, was commenting on the possibility the administration of U.S. President Donald Trump could offer a peace declaration as part of a denuclearization deal with the North.

In particular, he was asked by Rep. Ro Khanna (D-CA) of the House Armed Services Committee if the U.S. could first agree to a peace declaration before negotiating the details of North Korea's denuclearization. 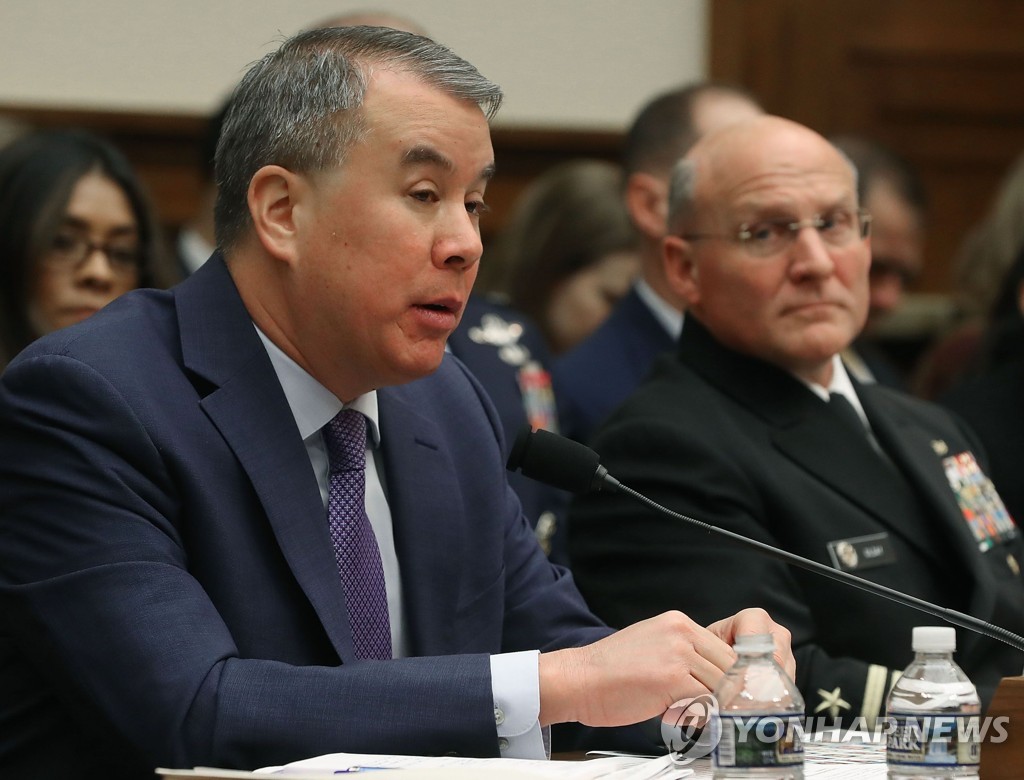 "From the Defense Department perspective ... if something like that could be negotiated with the North Koreans we would see that as being a beneficial thing," Rood told a committee hearing, noting that it is up to the State Department to decide on the sequencing of the steps.

The two countries have technically remained in a state of conflict after the 1950-53 Korean War ended in an armistice, not a peace treaty.

As denuclearization talks resumed in earnest in 2018, the Trump administration was reportedly ready to offer a peace agreement among several concessions in exchange for North Korea's nuclear weapons program, even if it was initially only political and not legally binding.

Talk of such a declaration has fizzled out since the two sides hit an impasse in negotiations following the no-deal summit between Trump and North Korean leader Kim Jong-un in February 2019.

"We have sought to negotiate those type of activities with the North Koreans and this would be another subject of the negotiations that could be worked out with the North," Rood said. "Obviously, you need the other parties involved to participate. You mentioned the South Koreans, but certainly the North Koreans would have to be, in my view, a willing participant and come to the table to work that out."

Rood agreed with the assessment of U.S. Northern Command that North Korea's intercontinental ballistic missile capabilities will pose a greater risk to the U.S. beginning around 2025, if they continue to develop at the current pace.

"We do have to watch the North Korean missile program and their associated other special weapons programs because the rate of progress is very substantial, and it continues," he said.

The under secretary also stressed the importance of quickly reaching a cost-sharing agreement with South Korea for the upkeep of 28,500 American troops on the peninsula.

Negotiations to renew the Special Measures Agreement have continued beyond the expiry of the previous deal at the end of last year amid Washington's demands for a hefty increase in Seoul's financial contributions.

Addressing concerns that in making such demands the administration fails to recognize the value of the alliance, Rood argued to the contrary.

"Burden-sharing doesn't come just down to dollars and cents, obviously," he said. "Koreans have a very large commitment that they make to the funding of their armed forces, to the size of their armed forces, to the capabilities they procure ... and this is part of our message to our State Department colleagues, that as you're approaching these negotiations -- and everyone wants equitable burden sharing -- some consideration just needs to be given about maintaining the health of that alliance as we go forward."

Rood also noted that South Korea purchases U.S. equipment to modernize its forces, which he said is an added benefit to the U.S.

"And we do have to be conscious ... about not sending an inadvertent signal to the North Koreans that there's some division within the alliance that we can't resolve," he cautioned.