SEOUL, Jan. 29 (Yonhap) -- South Korea's trade terms continued to worsen from a year earlier in December, largely due to export prices falling at a faster rate than import prices, but the rate of decline in export prices slowed to a 13-month low, central bank data showed Wednesday.

The terms of trade index for products came to 91.09 in the month, down 2.6 percent from a year earlier, according to preliminary data from the Bank of Korea (BOK).

December marks the 25th consecutive month of an on-year drop, while the index has also remained below the benchmark 100 since December 2017.

"The terms of trade index for products dropped 2.6 percent from the same month a year earlier in December as export prices dropped by a greater margin than imports at 7.9 percent to 5.5 percent," the BOK said. 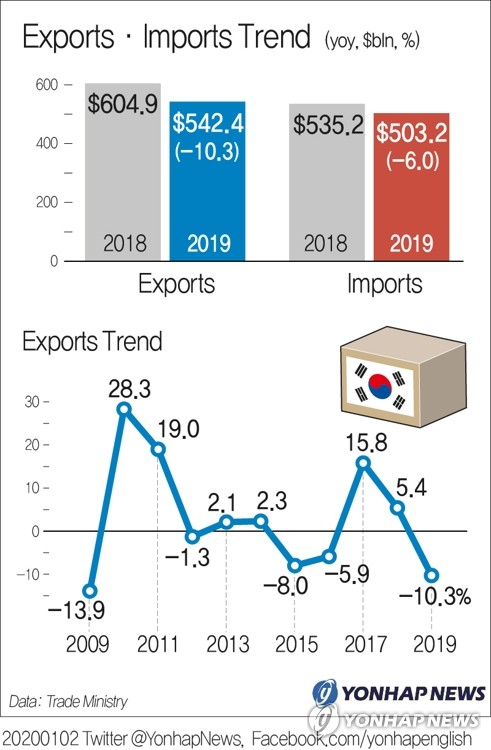 The export price index slipped only 0.9 percent from a year before to 109.77 in December, sharply slowing from a 12.5 percent on-year plunge the month before and marking the slowest on-year drop since November 2018, when the index gained 0.9 percent.

The sheer volume of South Korea's exports, on the other hand, rose sharply, with the export volume index jumping 7.7 percent on-year to 116.50.

For the whole of 2019, the country's trade terms index for products dropped 3.9 percent on-year, with its export price index plunging 10.3 percent and the import price index at 6.3 percent.

In 2019, South Korea's exports dropped by 10.3 percent on-year, and they are expected to rebound 3 percent this year on a recovery in chip prices and eased trade tension between the United States and China, its two largest trading partners.