The notice came as South Korea and the United States have engaged in grueling negotiations over how much Seoul should pay this year and beyond for the upkeep of the 28,500-strong USFK under the cost-sharing deal, called the Special Measures Agreement (SMA).

The previous one-year SMA expired on Dec. 31 -- one reason why the allies have been under pressure to clinch a new SMA. They last held negotiations in Washington earlier this month, but failed to reconcile their differences.

"Due to the 2019 Special Measures Agreement lapse and the continued absence of a subsequent agreement, United States Forces Korea began providing Korean National employees today with a 60-day notice of a potential administrative furlough that could occur on April 1, 2020 absent an agreed upon SMA," the USFK said in a press release.

The U.S. military also said that to remain "open and transparent" and provide information on the 60-day notice, the USFK will host town hall meetings across the peninsula for its South Korean workers through Thursday.

The USFK said that it has offered the notice as required by U.S. law, and that in October, it provided the employees with a six-month notice and associated time line for additional notifications for a potential furlough.

USFK Chief of Staff Major Gen. Stephen Williams sent the notice, saying if staff are furloughed, they will be placed on "temporary nonduty and nonpay status."

He also stressed that this action is being taken "solely for reasons outside of USFK control" and should not be considered a reflection on the employees' performance.

"USFK attempted to mitigate the shortfall in labor costs in consultation with the ROK Ministry of National Defense through all possible means at our disposal," Williams said in the notice obtained by Yonhap News Agency. ROK stands for South Korea's official name, Republic of Korea.

"We recognize the difficult personal financial implications of any furlough upon you and your family. We will make every effort to keep you informed," he added.

The town hall meetings and notifications of possible unpaid leave have added to the concerns of workers in charge of administrative, health, transportation, communications and cleaning services on the ground.

"It is the first time that the USFK has reached out to individual workers through town hall briefings and private notifications," Son GO, the secretary-general of the Korean Employees Union, told Yonhap News over the phone.

"The psychological pressure and anxiety is greater than what we felt last year," he added.

South Korea and the U.S are expected to hold the next round of SMA talks in Seoul next month. Seoul officials have stressed that both sides have broadened their mutual understanding in a sign of progress in the SMA talks.

Seoul's recent decision to expand the areas of operation for its anti-piracy Cheonghae Unit to cover the tense Strait of Hormuz in support of U.S. maritime security operations there also came amid its efforts to enhance its alliance contributions. 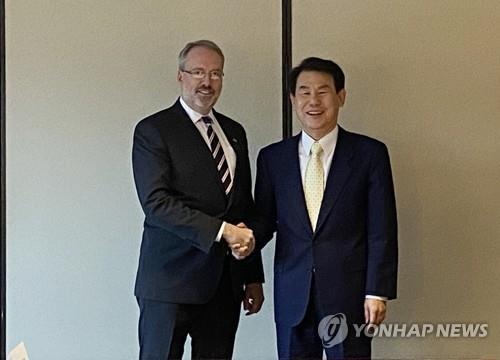