"There can be no compromise on the safety of the people," he said in televised remarks, presiding over an inter-agency meeting at the Government Complex Seoul on the country's response to the virus, which originated in China.

He urged the authorities here to be fully prepared for all scenarios and prepare all necessary measures.

"The faster preemptive, preventive measures are taken, the better -- and they should be powerful enough to be viewed as excessive," he said. "We need to maximize the response capacity of the government and local governments to prevent secondary infections." 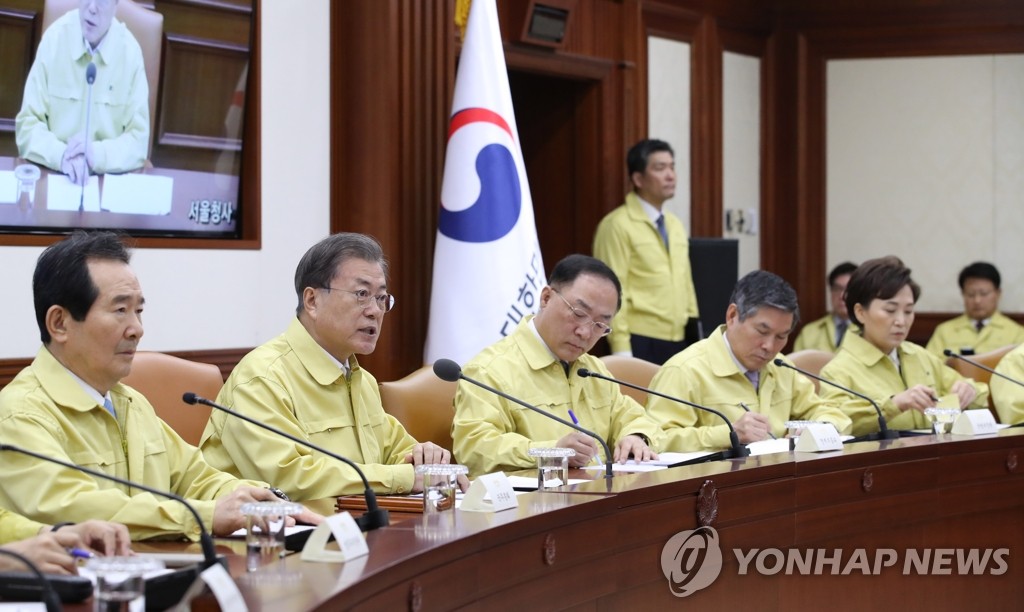 He instructed relevant government agencies to deal strictly with fake news that "goes beyond freedom of speech."

He instructed the government to release relevant information quickly and transparently.

The president emphasized the need for a can-do spirit, saying South Korea has world-class quarantine capabilities and experience in overcoming an outbreak like this.

"The weapons to protect ourselves from the new type of coronavirus are not terror and abhorrence but trust and cooperation," he said.

His remarks came amid protests by residents in two local towns, where hundreds of South Koreans evacuated from the Chinese city of Wuhan are set to be quarantined.

South Korea will begin bringing home around 700 people from there later in the day on chartered flights. The government has picked two state-run facilities in Asan and Jincheon, in the central provinces of South and North Chungcheong, as provisional accommodation.

"It is our natural national duty to protect the lives and safety of the people wherever they are," Moon said, adding the government will make sure there are "perfect" safety measures for residents in the two areas.

The president asked political parties to refrain from fighting over the public health issue.

The main opposition Liberty Korea Party called for an entry ban on all Chinese visitors, denouncing what it claims is the Moon administration's poor response to the spread of the virus.

Earlier this week, South Korea reported its fourth confirmed case of the Wuhan coronavirus, which involves pneumonia-like symptoms such as a cough and fever.