SEOUL, Jan. 30 (Yonhap) -- South Korea will strive further for the swift signing of a defense cost-sharing deal with the United States in order to minimize any possible impact of its delay on Koreans working for American troops, the defense ministry said Thursday.

The comment came a day after the U.S. Forces Korea (USFK) said it has begun sending a 60-day notice of potential furloughs to around 9,000 South Korean employees in what appears aimed at increasing pressure on Seoul amid the negotiations between the allies over the defense cost-sharing deal known as the Special Measures Agreement (SMA).

The deal regulates their sharing of the upkeep of the 28,500-strong USFK on Korean soil. The one-year SMA expired at the end of last year, and Seoul and Washington have been in talks over its renewal, with the last session held earlier this month in Washington.

"We are closely monitoring the situation regarding the employment of South Koreans (by the U.S. military). Through the swift settlement of the SMA, we will make efforts to minimize the effect on the Korean workers," defense ministry spokesperson Choi Hyun-soo told a regular briefing.

South Korea and the U.S are expected to hold the next round of SMA talks in Seoul next month. 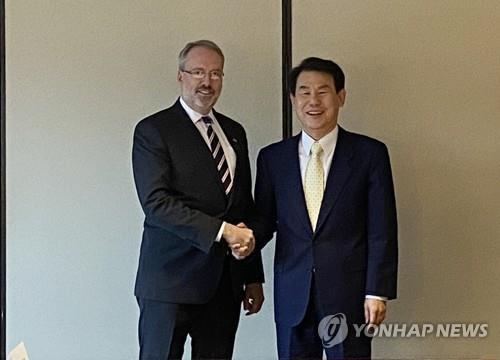