SEOUL, Jan. 30 (Yonhap) -- More than 100 additional military doctors and service personnel have been mobilized for quarantine operations to prevent the spread of the new type of coronavirus, the defense ministry said Thursday.

A total of 107 military doctors, nurses and other personnel have been assigned to Incheon International Airport, the main gateway to the country, for efforts against the outbreak, defense ministry spokesperson Choi Hyun-soo said during a regular briefing.

They were in addition to the 106 personnel who were sent last week to 21 checkpoints set up at seaports and airports across the country to help with body temperature checks and other quarantine efforts.

Speaking of measures to prevent the spread of the deadly virus into barracks, the ministry said around 124 soldiers who visited China this month have been in isolation either in separate zones of their bases or their residences.

"No confirmed or suspected cases have been reported (among service personnel)," Choi said, adding that the ministry has advised soldiers to refrain from outings.

So far, South Korea has reported four confirmed cases of the pneumonia-like sickness that first began in the Chinese city of Wuhan. 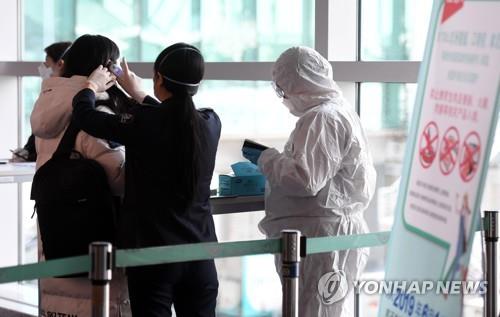