SEOUL, Jan. 30 (Yonhap) -- The defense ministry temporarily banned service personnel from visiting China as part of efforts to prevent the new coronavirus from spreading to the military, officials said Thursday.

Issuing an official instruction the previous day, the ministry banned all service members, including draftees, from visiting China either for personal or business purposes on a temporary basis, according to a ministry official.

"We will review whether to further expand the measure depending on how things unfold down the road," the official said. 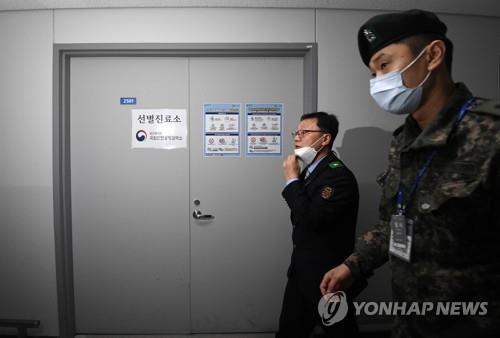 In line with efforts against the new virus that was first discovered in the Chinese city of Wuhan, the authorities have put around 180 soldiers who visited China recently in isolation, either in separate zones of their bases or their residences.

No confirmed or suspected cases have been reported among soldiers, according to the ministry. So far, South Korea has confirmed four cases of the pneumonia-like illness.

The ministry also called for the suspension of field training in regions where confirmed cases were reported and advised soldiers to refrain from outings.

"We will delay or cancel large-scale planned events if possible, and have been holding video conferences more often now," a ministry official said.

In order to support pan-government quarantine efforts, the ministry recently mobilized 107 military doctors, nurses and other personnel, and assigned them to Incheon International Airport, the main gateway to the country, ministry spokesperson Choi Hyun-soo said during a regular briefing.

They were in addition to the 106 personnel who were sent last week to 21 checkpoints set up at seaports and airports across the country to help with body temperature checks and other quarantine efforts.