SEOUL, Jan. 30 (Yonhap) -- The South Korean Air Force is reconsidering whether to participate in an upcoming international airshow in Singapore as the new coronavirus continues to spread, officials said Thursday.

The Air Force's Black Eagles had planned to head for Singapore on Friday to take part in the biennial Singapore Airshow 2020 from Feb. 11-16 but decided to delay their departure.

"A ceremony scheduled for Thursday to mark the Black Eagles' departure was delayed in consideration of the situation regarding the new coronavirus," the Air Force said in a brief release.

Initially, the military aerobatic team was supposed to arrive at the venue on Tuesday after making stopovers in Taiwan, Malaysia and other East Asian regions.

"Discussions regarding the air show have been under way, including whether to take part in it as planned," an officer said, adding that the Air Force is closely watching related developments.

So far, four cases of the deadly virus have been confirmed in South Korea, and Singapore has reported 10 confirmed cases.

The air show is expected to bring together more than 1,000 companies from 50 countries across the globe, as well as around 55,000 trade participants, according to its organizer. 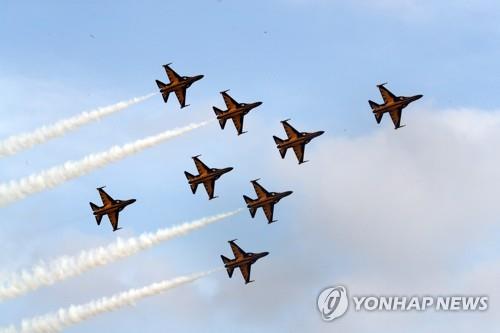