(ATTN: UPDATES with confirmed cases of the coronavirus in 13th para)
By Choi Kyong-ae

Korean Air Lines Co., the country's national flag carrier, said it will reduce or suspend some of its flights to China from Sunday in line with global airlines that take similar steps amid mounting fears about the virus, believed to have originated in the Chinese city of Wuhan.

"We will halt or suspend services on some of our Chinese routes next week to respond to declining demand to and from China due to closure of tour destinations in China and the cancellation of business trips there," the company said in a statement. 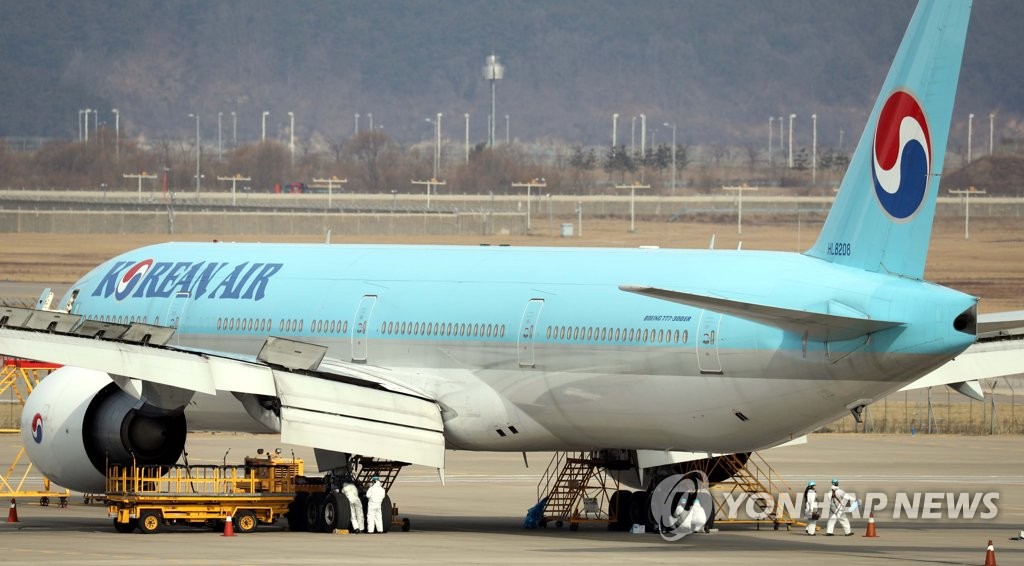 The company also plans to reduce the number of flights on routes from Incheon to Qingdao, Shenyang and Beijing and routes from Busan to Qingdao and Shanghai, effective the same day.

Korean Air's four flights a week to Wuhan will be suspended until March 27, the company said.

"Customers who cancel or postpone flights to China will be exempted from paying charges for cancellations or postponements until the end of March," a company spokeswoman said.

Low-cost carriers have joined the two full-service carriers by taking preventive measures to minimize the impact of the crisis on their businesses this year.

Jeju Air Co., the country's biggest low-cost carrier by sales, said Wednesday it will gradually suspend six routes to Zhangjiajie from Incheon and other local airports in the coming weeks and will take additional steps depending on further developments.

The new coronavirus virus first appeared in Wuhan, the central Chinese city of 11 million people at the center of the outbreak, last month and has infected thousands and killed more than 100 in China. Cases have stretched beyond Asia, including as far away as the United States.

South Korea has reported six confirmed cases of the new coronavirus, and the authorities have raised the country's infectious disease alert level one notch from yellow to orange, the third highest.

Symptoms of the virus include fever, coughing, and in more severe cases, shortness of breath or pneumonia.

Concerns about the respiratory ailment now extend beyond health to its impact on the economy.

Among businesses, the airline industry appears set to bear the brunt of the fallout from the coronavirus if it continues to spread across borders, further sapping travel demand.

Korean Air and Asiana may suffer hefty losses if the virus continues to spread across borders and affect travel demand going forward, they said.

Korean Air and Asiana earn more than 10 percent and nearly 20 percent of their sales, respectively, from services on Chinese routes, according to the companies.

Given this, they are expected to post weak earnings results in the first quarter if demand on Chinese routes continues to decline due to the virus.