JINCHEON/ASAN, South Korea, Jan. 30 (Yonhap) -- Local residents of two South Korean towns on Thursday continued their protests around provincial facilities that will accommodate evacuees from the Chinese city at the epicenter of a new coronavirus outbreak.

South Korea plans to send a chartered flight later in the day to begin bringing home about 700 nationals from Wuhan, China.

The government decided the previous day to quarantine them at two public facilities in Asan and Jincheon County in the country's central region for two weeks, triggering angry protests from local residents concerned about possible contagion.

On Thursday afternoon, protesters in Asan, South Chungcheong Province, hurled eggs at Minister of Interior and Safety Chin Young, who was there to persuade them to accept the quarantine plan.

Dozens of residents began to camp out again early in the morning in front of the Police Human Resources Development Institute, one of the temporary accommodations for evacuees.

They clashed with police as they tried to block the street and some lay down on the road before the minister's arrival.

They held signs that read "We object to the accommodation of compatriots from China," and some shouted insults and threw eggs at the minister and Gov. Yang Seung-jo when they arrived at the town's community center. 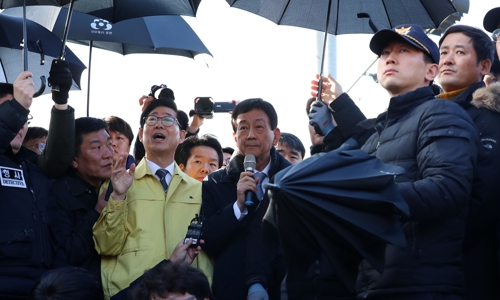 Tension was also high around the National Human Resources Development Institute in Jincheon, North Chungcheong Province, which will also host people from Wuhan.

On late Wednesday, local residents staged sit-in protests and threw water bottles and paper cups at a vice health minister who visited to hold talks with them.

During the night the Jincheon police agency deployed 700 police officers and surrounded the facility with tens of vehicles to block the protesters.

On Thursday morning, about 100 residents continued the protest in front of the building.

"The central government unilaterally made the decision without collecting opinions from residents," Rep. Kyeong Dae-soo of the main opposition Liberty Korea Party said during the rally.

He demanded the government cancel the plan, noting that there are about 800 households within a 500 meter radius of the institute.

Despite the objections, the government proceeded with preparations to host the South Koreans from China.

On Thursday morning, protesters removed tractors and trucks, which they had placed the previous day to block the entrances of the facilities, after police warned that vehicles that illegally occupying the road would be towed away.

The government plans to move supplies for the evacuees into the facilities later in the day. Two trucks possibly carrying such materials were spotted entering the Jincheon complex. Disinfection equipment for persons and vehicles were set up in the Asan police institute.
(END)