SEOUL, Jan. 31 (Yonhap) -- SK hynix Inc., South Korea's No. 2 chipmaker, said Friday it swung to a loss in the fourth quarter from a year earlier due to a slump in the memory chip sector.

For the three months that ended Dec. 31, SK hynix shifted to a net loss of 118.2 billion won (US$99.8 million) from a net profit of 3.39 trillion won a year earlier, the company said in a regulatory filing.

Operating profit for the October-December period reached 236 billion won, down 94.7 percent from a year ago, while revenue fell 30.3 percent on-year to 6.92 trillion won in the cited period.

SK hynix, the world's second-largest maker of DRAM chips and the No. 6 vendor of NAND flash chips, said that low profitability of the product lines and the cost burden of new technology migration also dragged down its bottom line.

The company said bit shipments of both DRAM and NAND flash chips increased in the fourth quarter compared with the previous quarter. However, the average selling price of DRAM chips dropped by 7 percent, while that of NAND flash chips remained stable.

Operating profit for the year was tallied at 2.71 trillion won, also down 87 percent from the previous year. Its revenue fell 33.3 percent to 26.99 trillion won last year.

"Amid increasing global economic uncertainty, the increase of inventory burden and conservative purchasing policies on the side of the customers led to a slowdown in demand, as well as price falls," the company said.

This year, SK hynix said it will pursue "more prudent production and investment strategies," noting that uncertainties are much higher than in the past.

For DRAM, the company said it plans to increase the proportion of 1Ynm products and begin mass-production of 1Znm products in 2020. 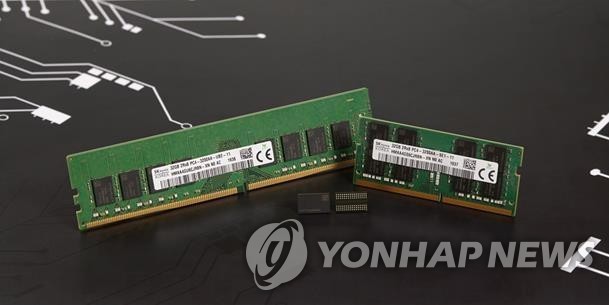 In a conference call, SK hynix expected bit growth of 20 percent for DRAM and 30 percent for NAND flash this year. Bit growth refers to the amount of memory produced and is considered a key barometer for gauging market demand.

The company said last year's capital expenditures reached 12.7 trillion won, down from 17 trillion won from a year ago.

Shares in SK hynix closed at 93,500 won on the Seoul bourse, down 0.53 percent from the previous session. The earnings report was released before the market closed.
(END)