WASHINGTON, Jan. 30 (Yonhap) -- The United States is ready to respond to any "late Christmas gift" from North Korea, a Pentagon official said Thursday, referring to the possibility of a North Korean provocation, such as a long-range missile test.

North Korea warned last year that it could send a "Christmas gift" to the U.S. in protest of stalled denuclearization negotiations between the countries, adding to concerns that the regime could resume its nuclear and intercontinental ballistic missile tests.

The year passed without such a provocation, but Heino Klinck, deputy assistant secretary of defense for East Asia, suggested that tensions remain. 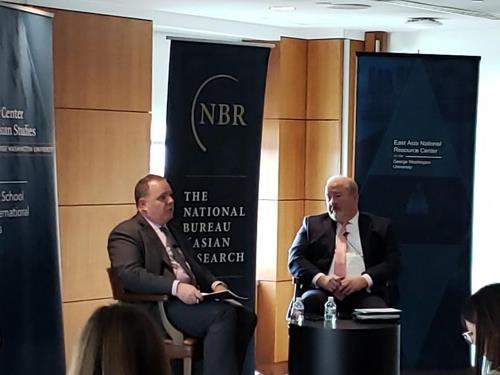 "I would say we're postured to respond to a late Christmas gift, if that happens," he said at a seminar hosted by the National Bureau of Asian Research.

"Hopefully, it won't happen. Everyone in the government wants a diplomatic solution. There's nobody in the Department of Defense that does not want to give the State Department room to get to a successful outcome diplomatically. That being said, we all know that North Korea, in essence, has one playbook, which is provocation. So, we're ready to respond through a variety of means, if need be, if they revert to that playbook," he added.

Klinck noted that South Korea and the U.S. scaled back some combined military exercises to facilitate the negotiations with the North. Pyongyang has long condemned the drills as rehearsals for an invasion.

"This is because, quite frankly, (U.S. President Donald Trump) wants to give every opportunity for diplomacy to win," he said. "And we are in a supporting role to the State Department. We want to ensure that we can give them the maximum amount of maneuverability that they need in negotiating with North Korea."

Klinck also sought to dismiss concerns about the health of the South Korea-U.S. alliance amid tough ongoing negotiations on sharing the costs for the stationing of 28,500 American troops on the peninsula.

"I want to downplay some of the tensions and differences," he said. "We need to remember it's an ironclad alliance focused on a common threat."

Klinck acknowledged that there are challenges between the countries. He also reiterated Washington's position that Seoul can increase its financial contributions to the upkeep of the American troops.

"Two sovereign countries. Two democratic countries that are always interested in furthering their national interests," he said. "There are going to be some disagreements. We're optimistic that we'll get to a point where there will be a fair and equitable burden sharing on both countries."