SEOUL, Jan. 31 (Yonhap) -- The Navy said Friday that it has suspended tour programs to a security park and its military academy in the wake of the new coronavirus outbreak.

The Navy halted visits to the security park at the 2nd Fleet headquarters in Pyeongtaek, Gyeonggi Province, where the Cheonan warship, torpedoed by North Korea in 2010, is in drydock.

It also stopped public trips to the naval academy in the southeastern city of Changwon.

"The suspension will continue until the situation regarding the new coronavirus ends," the Navy said in a release.

As of Friday morning, South Korea has confirmed seven cases of the pneumonia-like illness.

As part of containment efforts, the defense ministry began body temperature checks of all people entering the ministry building in Seoul.

Earlier, the ministry temporarily banned soldiers traveling to China for personal or business purposes, as the virus first broke out in the Chinese city of Wuhan, and has quarantined more than 120 soldiers who recently visited the country.

"No confirmed or suspected cases have been reported among service personnel so far. We will continue to do our best to prevent the virus from spreading to the barracks and to proactively support government-wide efforts," a ministry official said. 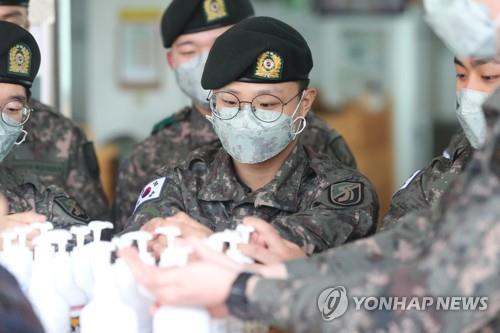