SEOUL, Jan. 31 (Yonhap) -- The director and cast of the critically acclaimed movie "Bleak Night" (2011) are set to return with a new thriller, "Time to Hunt."

Director Yoon Sung-hyun's second full-length film is a story of four young friends who try to map out a plan to escape a hopeless, devastated city. But their lives are at risk as they become a target of an unknown pursuer.

It has been in the media spotlight due to the reunion of the lead actors from "Bleak Night," Lee Je-hoon and Park Jung-min, and the presence of "Parasite" star Choi Woo-shik.

Lee and Park played high school students in the 2011 film, which features teenage friendship and discontent and a father's search for answers about his son's death. 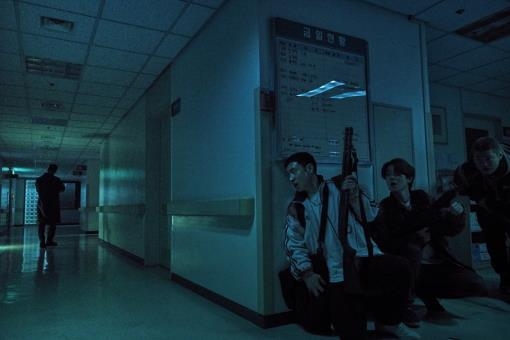 The director said he wants to make a film like the "Jaws" and "Mad Max" series, with a simple, linear plot and cinematic situations and characters.

"This movie focuses on expressionism, rather than on reality and narrative," Yoon said in a press conference in Seoul on Friday. "'Time to Hunt' has simple but detailed expressions in cinematography and sound. Characters respond to the intense situations like a thrilling chase and hunt, rather than their emotions or stories."

On the other hand, he said "Bleak Night," which was invited to the official competition section of the 2011 International Film Festival Rotterdam, has a complex and deep narrative structure that depicts real emotions.

"It is a totally different genre, compared with my previous work," he said. "So it took nearly two years to edit shots and mix sound."

"I've long dreamed of working with the members of 'Bleak Night' again," said Lee, who portrays the youngsters' leader, recently released from prison. "I'm so pleased to be here and create a new acting ensemble with other good actors."

"Time to Hunt" will premiere in the Berlinale Special section of the upcoming Berlin International Film Festival before hitting South Korean theaters next month.