SEOUL, Jan. 31 (Yonhap) -- Places visited by people who have been confirmed as infected with the new coronavirus are suspending their business operations as part of efforts to contain the spread of the virus that originated in China, industry sources said Friday.

The total number of people infected with the virus in South Korea rose to 11 on Friday.

A movie theater affiliated with CJ CGV, South Korea's largest multiplex cinema chain, announced it closed on Thursday night and will remain shut until Sunday, after the fifth patient confirmed as infected with the virus was known to have gone there.

At the theater, ticket machines and other pieces of equipment were switched off and the popcorn machines were covered up.

There was no access to the elevators leading to the 10th floor, where the cinema is located, and the corresponding elevator button did not work.

At the entrance to the theater, a sign announced the decision, citing quarantine work, and asked customers to be patient. 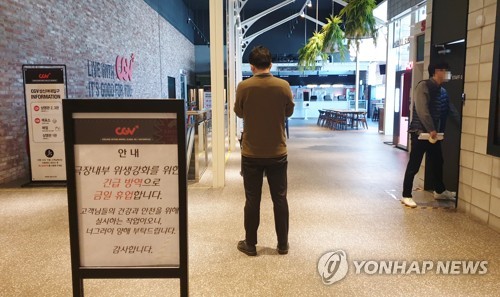 Hanilkwan said via its website the outlet has been quarantined in line with the health authorities' instructions and will be closed until Wednesday for hygiene checks.

The fifth patient, who had never been to Wuhan, the Chinese city at the center of the virus outbreak, is believed to be the first case of human-to-human transmission in South Korea.

A day care center in the town of Taean on South Korea's west coast also decided to suspend operations after it became known that one of its employees, a daughter of the sixth patient to be confirmed to have contracted the virus, had been in contact with her father during the Lunar New Year holiday period last week.

She taught the center's kids Tuesday through Thursday and the center has had itself quarantined and decided to suspend its business until February 10, based on the virus' 14-day incubation period.