SEOUL, Jan. 31 (Yonhap) -- The heiress of South Korean airline-focused conglomerate Hanjin Group, widely known for the "nut rage" incident in 2014, has joined hands with a local fund and a builder for the group's management control ahead of a shareholders meeting in March.

"In the upcoming shareholders meeting, the three parties have agreed to cooperate for Hanjin Group by jointly exercising voting rights and making some suggestions as shareholders," Cho said in the statement. 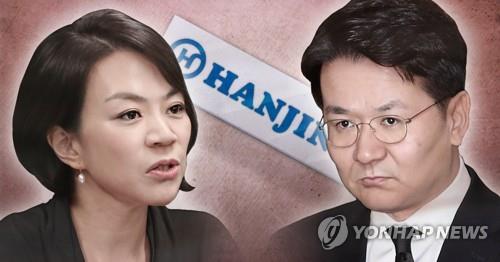 The 45-year-old heiress had meetings with KCGI and Bando this month after lashing out at her younger brother Cho Won-tae, chairman of the airline-to-logistics conglomerate and the national flag carrier, for not heeding their father's wishes in the way of managing the group.

She claimed that her 44-year-old brother was appointed to the top post without sufficient discussions among family members after their father's death in April and has been making management decisions without prior consultations.

Her brother seeks to be reelected as head of Hanjin Group and Korean Air in March.

The Cho family and other relatives together hold a 28.93 percent stake in Hanjin KAL, the holding company of Hanjin Group. Hyun-ah owns a 6.49 percent stake and Won-tae holds a 6.52 percent stake, with their younger sister Cho Hyun-min and mother Lee Myung-hee controlling 6.47 percent and 5.31 percent, respectively.

KCGI is the biggest shareholder with a stake of 17.29 percent in Hanjin KAL, followed by Delta Air Lines Inc. with 10 percent, Bando with 8.28 percent and the National Pension Service (NPS), South Korea's state pension fund, with 4.11 percent.