The sales results reflect Hyundai and Kia's vehicle supply shortage and the three other carmakers' lack of new, competitive models amid lackluster sales particularly in China and other emerging markets. 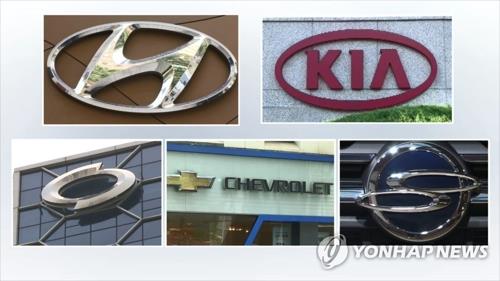 Hyundai and Kia, the country's two biggest carmakers by sales, sold a combined 519,188 autos in global markets last month, down 1.2 percent from 525,264 a year earlier.

But Hyundai and Kia didn't expect any meaningful rebound in China, the world's biggest automobile market, for the time being.

Weak sales in China are expected to remain a headache for the carmakers in achieving their overall sales target of 7.54 million vehicles in global markets this year. They sold 7.2 million units last year, missing their target of 7.55 million units.

In China, Hyundai and Kia suffered declining sales due to tougher competition and lack of new models, though political tensions between Seoul and Beijing caused by the deployment of an advanced U.S. missile defense system, called THAAD, in South Korea in 2017 have since eased.

To offset weak demand in China, the carmakers said they will put a bigger focus on boosting sales in the U.S. market this year by launching Hyundai's Tucson SUV, Hyundai's independent Genesis brand's GV80 SUV and G80 sedan and Kia's Sportage SUV.

"With lower demand in advanced markets, a prolonged economic slowdown and spread of protectionism still seen as major challenges, we will focus on improving profitability based on competitive models and a fast decision-making process," Hyundai said in a statement.

The three other carmakers reported declines in January sales.

Renault Samsung was the worst performer. Its sales plunged 55 percent on-year to 6,233 units due to a lack of new models and continued labor disputes.

Renault Samsung and its union have yet to sign a wage deal for the year of 2019. The union has staged strikes in protest against the company's wage freeze proposal.

In October, the company reduced production at its sole plant in Busan, 454 kilometers southeast of Seoul, due to declining sales and a lack of a new vehicle for export.

Renault Samsung had produced about 100,000 Rogues at the Busan plant for exports on a manufacturing contract with Nissan. But Nissan cut its output allocation to the plant to 60,000 from 100,000 early last year due to output losses caused by the union's strikes.

GM Korea's sales declined 47 percent to 20,484 last year from 38,705 a year ago due to weak demand for its models, such as the midsized Colorado pickup truck and the Traverse SUV brought from the United States last year.

SUV-focused SsangYong Motor's sales fell 33 percent to 7,653 from 11,420 during the cited period as customers chose models from bigger rivals, such as Hyundai and Kia, over its SUVs, like the Tivoli SUV.

Adding to the woes of local carmakers, the rapidly spreading coronavirus is having an impact on the supply of auto components made in China and shipped to their plants in South Korea.

SsangYong Motor plans to stop operations of its sole car assembly plant in Pyeongtaek, 70 km south of Seoul during the Feb. 4-12 period due to shortages of wiring parts.

The decision will soon affect the production of vehicles at GM Korea, Renault Samsung and SsangYong. GM Korea and Renault Samsung said they are closely monitoring the situation involving the novel coronavirus to minimize the impact on production.

Hyundai and Kia do not receive wiring parts from Leoni's Chinese plant, but they also expect a lack of wiring and other parts from South Korean suppliers that have plants in China.

Hyundai canceled overtime work over the weekend to produce the flagship Palisade SUV at the Ulsan plant in an initial countermeasure to manage its parts inventories.

Kia has started reducing production at its domestic plants for the same reason.

The new coronavirus emerged in the Chinese city of Wuhan late last year and has spread to more than 20 countries. In China, it has killed more than 360 and infected more than 16,400 people.

South Korea has reported 15 confirmed coronavirus cases as of Monday.

Keywords
#carmakers-Jan. sales
Issue Keywords
Most Liked
Most Saved
Most Viewed All Categories
Most Viewed More
Most Viewed Photos