The combined sales of local duty-free shops reached 24.86 trillion won (US$20.87 billion) in 2019, up 31.1 percent from a previous record of 18.96 trillion won a year earlier, according to the data from the Korea Duty Free Shops Association.

Sales at the local duty-free shops witnessed a slight fall in 2017 following a diplomatic row with China over the deployment of an advanced U.S. missile defense system here. Sales, however, swung to an upturn in 2018. 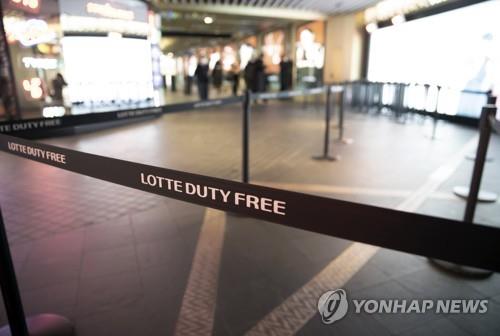 Industry watchers said small-scale Chinese vendors who sell their duty-free purchases, such as cosmetic products, to consumers back home, have been driving duty-free sales and replacing package tourists.

The data showed that the number of foreign visitors came to over 20 million last year, up from 18 million a year earlier.

Despite the upbeat performance, the new coronavirus outbreak could affect consumer confidence.

Major players, including Lotte Duty Free and Shilla Duty Free, temporarily closed outlets over the weekend, and announced that they will shorten business hours.

Duty-free stores also logged decreased sales at their downtown outlets, with Lotte Duty Free reporting around a 30-percent on-year decrease in sales over the Saturday-Sunday.

So far, the country has reported a total of 15 cases.