SEOUL, Feb. 4 (Yonhap) -- South Korea's tourism industry is expected to take the hardest hit among local businesses here from the outbreak of a new coronavirus as more citizens cancel their overseas trips out of infection concerns, industry data showed Tuesday.

According to the country's largest travel agency HanaTour, a total of 187,000 reservations for overseas trips were made in January, down 49.7 percent from a year earlier.

Cancellations for trip programs to China increased by a whopping 62.2 percent compared with a year earlier starting in mid-December, the data showed. 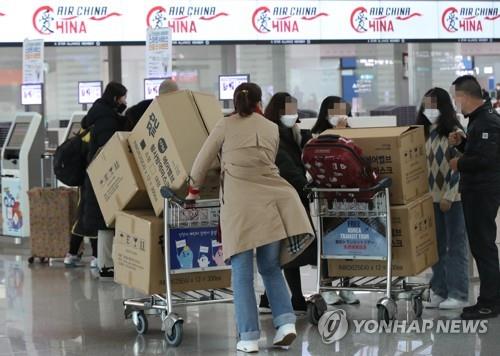 Adding to woes is that people are not only canceling trips to China but also trips to Southeast Asian countries and other parts of the world as they fear they may encounter possible virus-infected Chinese people at airports.

Cancellations of trips to other parts of the world also sharply increased last month, with Japan logging an 85.8 percent on-year jump and the United States with a 24.2 percent on-year rise

Meanwhile, trips to Saipan and Guam -- regions considered to be less affected by the pneumonia-like virus -- increased by 33.8 percent on-year.

South Korea has reported a total of 16 confirmed coronavirus cases as of Tuesday. The death toll from the virus in mainland China has reached 425, far topping that of the SARS outbreak.

Overseas trip cancellations sharply up in Jan. due to coronavirus outbreak

Overseas trip cancellations sharply up in Jan. due to coronavirus outbreak