Around 180 soldiers were tasked with body temperature checks and other screening measures and 37 others have provided interpretation services at the airport, the main gateway to South Korea, according to the ministry.

Previously, around 200 military doctors, nurses and other personnel were sent to 21 checkpoints set up at seaports and airports across the country.

As part of efforts to contain the spread of the deadly virus, South Korea implemented more stringent quarantine measures for all entrants from China through the Incheon airport, and has striven to taken such special steps at other checkpoints as soon as possible, according to officials.

Currently, around 800 soldiers have been quarantined, as they either visited China, Hong Kong or Macao, or had contact with such visitors in the past 14 days, which equals the incubation period for the novel virus.

"Currently, we aren't experiencing any shortage of protective masks for soldiers. We plan to give 50 masks to each soldier this year and have been distributing them accordingly," ministry spokesperson Choi Hyun-soo told a regular briefing. "We will secure more if necessary."

As of Tuesday morning, South Korea had 16 confirmed cases of the virus, believed to have originated in the central Chinese city of Wuhan. No suspected or confirmed cases have been reported among soldiers. 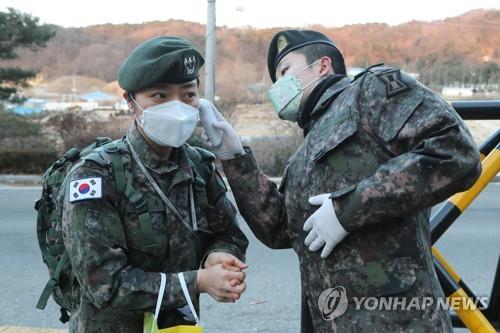