SEOUL, Feb. 4 (Yonhap) -- The South Korean women's national basketball team literally took a long way to get to its Olympic qualifying tournament. Its coach Lee Moon-kyu wants his squad to take a more direct route, figuratively, to the Summer Games in Tokyo.

South Korea has been paired with China, Britain and Spain in one of four final qualifying competitions for Tokyo 2020. The top three teams after a round robin, which will start Thursday in Serbia's Belgrade, will punch their Olympic tickets.

The tournament had been scheduled to begin in Foshan, China, but International Basketball Federation (FIBA) decided last week to move the event out of the country, following the outbreak of the novel coronavirus.

That meant a far longer trip for South Korea and adjusting to the time difference suddenly became a new challenge. Foshan is only one hour behind Seoul, but Belgrade is eight hours back. 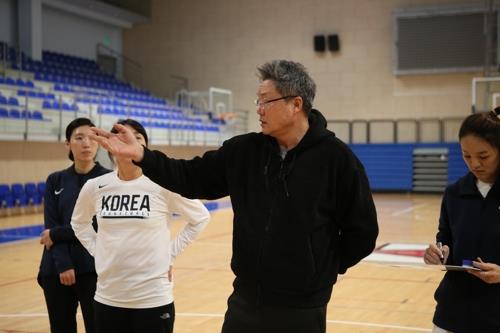 Lee's team landed in Belgrade on Monday, and the coach said his players have taken the sudden change in venues in stride.

"I was concerned about jet lag, but the players looked great. I think they all must have slept well on the plane," the coach said. "I think they will be fully adjusted to the new time zone soon."

Lee has so much more than jetlag to worry about. At No. 19 in the rankings, South Korea is the lowest in the group, behind Spain (No. 3), China (No. 8) and Britain (No. 18). But since South Korea only needs to avoid finishing last, one victory could get the job done. The coach said, though, he wants to qualify for the Olympics in convincing fashion.

"Spain is the strongest team in this group, and we'll focus on the remaining two games," Lee said. "We'll try to pick up two wins so we can get into the Olympics safely. We'll also have to be mindful of point difference (in the tiebreak situation)."

Lee added that having the tournament in Serbia instead of China could be a blessing in disguise for his team, because China, too, will have to make the long trip to Europe and South Korea would have a better chance against a fatigued Chinese team.

The current iteration of the team features just one player with prior Olympic experience: forward Kim Jung-eun, who competed at the 2008 Olympics in Beijing.

She's the oldest South Korean players in the tournament at 32, and she's dealing with an Achilles tendon injury that will likely call for minutes restriction. Lee said Kim could be available for 15 to 20 minutes against Britain and China, hinting that he'll probably rest the veteran and punt the opening game against Spain.

Kim said she's frustrated with her injury because she's itching to get going from the opening tipoff.

"I think this will be my last opportunity to try to play in the Olympics," she said. "I want to help bring women's basketball in Korea back to relevance, and qualifying for the Olympics will be really important to that end."