SEOUL, Feb. 4 (Yonhap) -- The heiress of South Korea's Hanjin Group, widely known for the "nut rage" incident in 2014, on Tuesday faced opposition from her family members over the way of managing the airline-focused conglomerate she proposed last month.

In response to Hyun-ah's alliance with the KCGI and Bando, her mother Lee Myung-hee and younger sister Hyun-min, 37, released a joint statement to say they oppose Hyun-ah's approach, expressing regret over her decision.

In 2014, Hyun-ah forced a Korean Air flight back to the boarding gate at a New York airport because she lost her temper over the way she was served nuts in first class -- in an unopened bag instead of on a plate.

In 2018, Hyun-ah, the former vice president of the group's flagship Korean Air, came back as head of KAL Hotel Network Co., the hotel affiliate of Hanjin Group. But she was dismissed from the post a month later amid public criticism. 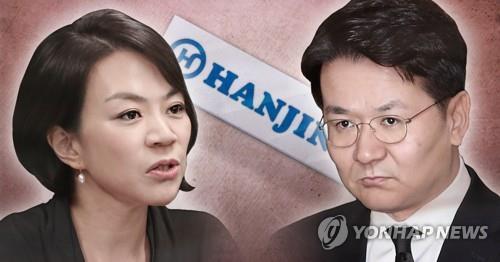