SEOUL, Feb. 4 (Yonhap) -- Diplomats from South Korea and Japan will meet in Seoul this week to continue working-level talks on a protracted row over wartime history and trade, the foreign ministry said Tuesday.

Kim Jung-han, director-general for Asia and Pacific affairs, will meet with his Japanese counterpart, Shigeki Takizaki, on Thursday to discuss the pending issues, the ministry said in a release. Takizaki is expected to arrive in Seoul on Wednesday.

This week's talks come about three weeks after their last meeting, which took place in San Francisco when the two were accompanying their foreign ministers gathered for trilateral talks with the United States.

Relations between Seoul and Tokyo remain chilled as the two countries remain far apart over how to resolve Tokyo's export restrictions against Seoul that came in protest of South Korean court rulings that ordered Japanese firms to compensate victims of wartime forced labor.

Seoul decided to terminate a military information-sharing pact with Japan in a tit-for-tat move against Tokyo's export control, but the planned termination was suspended at the last minute in November as the two sides agreed to seek solutions through diplomacy.

South Korea has called for Japan to retract the export controls and has stressed that addressing the pending wartime issues cannot proceed without respecting the top court's decisions on the forced labor victims. Japan has insisted all reparation issues regarding its 1910-45 occupation of the Korean peninsula were settled in a 1965 accord that normalized their ties.

In San Francisco, Foreign Minister Kang Kyung-wha had one-on-one talks with her Japanese counterpart, Toshimitsu Motegi, on the sidelines of the trilateral gathering to discuss the row, but the talks ended without progress. 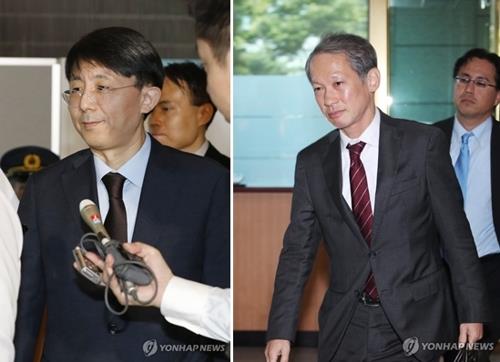