SEOUL, Feb. 5 (Yonhap) -- A massive network of shining aluminium hoops was set up by New York's East River against the backdrop of the city's famous skyline Tuesday (U.S. time).

The 4.5-meter-high installation made of aluminum tubes 18 kilometers in total length, is Gormley's interpretation of the connectivity and inclusiveness of BTS' global music career. 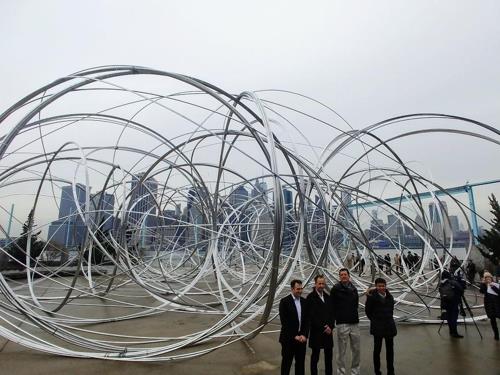 Art connects individuals, and BTS is contributing to facilitating connectedness across the globe with their music, the British artist told the media during a ceremony to launch the installation at Brooklyn Bridge Park Pier 3.

The aluminum tubing has no beginning or end, and the one long, connected line was designed to represent a sense of union, he noted.

It is the first outdoor public art installation of the British sculptor's "Clearing" sculpture series.

The work's chain of repeating aluminum hoops, set up at a major Manhattan viewing point, helps visually smooth out the edges of the city's skyscrapers, infusing them with a streak of energy, according to Art Place, a curating company in charge of organizing the project.

The New York leg of CONNECT, BTS runs till March 27. 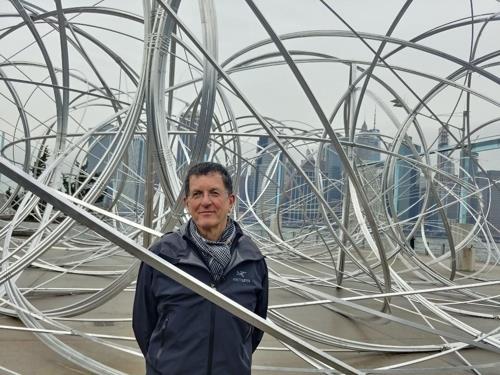 The five-city art project in collaboration with BTS kicked off at London's Serpentine Gallery on Jan. 14 to present artworks that dovetail with BTS' musical philosophy, which centers around diversity, love and care for things on the periphery of life.

A total of 22 artists from across the globe have joined the international contemporary art project, launched in the run-up to the release of the band's new album, "Map of the Soul: 7," on Feb. 21.