WASHINGTON, Feb. 4 (Yonhap) -- U.S. President Donald Trump made no mention of North Korea in his third State of the Union address Tuesday, amid the stalled denuclearization talks with the communist nation.

It was the first time Trump ignored North Korea in his annual speech. That suggests a realignment of priorities amid an ongoing impeachment trial and reelection campaign.

In his first State of the Union address in 2018, the president talked about the threat of North Korea's nuclear weapons and vowed to break from the mistakes of past administrations to ensure that threat never reached the U.S. homeland. 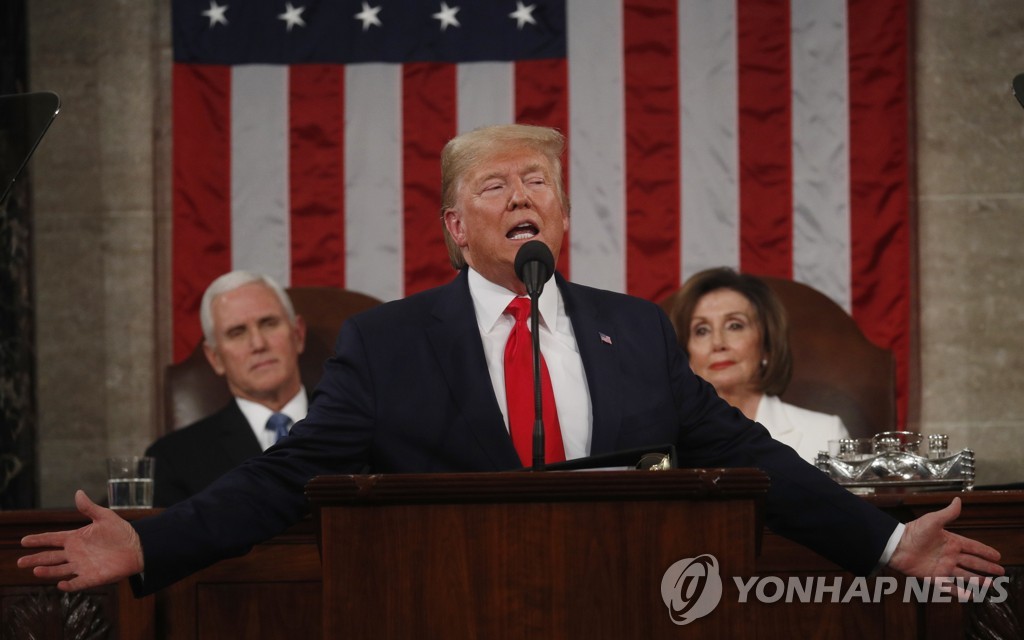 He also invited North Korean defector Ji Seong-ho as one of his guests to highlight the regime's brutal treatment of its own people. A moving moment was created as Ji, who lost his limbs in North Korea, triumphantly held up his crutches to the applause of members in the chamber.

The same night, Trump invited and honored the parents of Otto Warmbier, an American college student who died in 2017 after being detained in North Korea for more than a year.

Following a historic 2018 that saw the first U.S.-North Korea summit between Trump and Kim Jong-un in June of that year, Trump adopted a softer tone in his second address in February 2019.

He announced that his second summit with the North Korean leader would be held in Vietnam later that month. "Much work remains to be done," Trump said, "but my relationship with Kim Jong-un is a good one."

"As part of a bold new diplomacy, we continue our historic push for peace on the Korean Peninsula," he added, claiming that had he not been elected president, the U.S. would be in a "major war" with the North.

Tuesday's speech took place a day before the Senate is expected to acquit Trump of charges of abuse of power in an impeachment trial the president has slammed as a "witch hunt."

He titled his speech the "Great American Comeback" and focused on his administration's records on jobs, trade and national security.

"We are also finally getting our allies to help pay their fair share," Trump said, stopping short of mentioning ongoing cost-sharing negotiations between South Korea and the U.S. for keeping American troops on the peninsula.

Trump skips N. Korea in State of the Union speech

Trump skips N. Korea in State of the Union speech