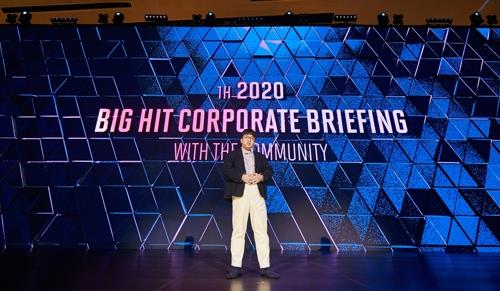 On top of them all, BTS cemented its global presence as superstars last year, bringing its world concert tour to one of the world's most lucrative concert series and achieving its historic third No. 1 on the Billboard 200 music chart.

He also unveiled a plan to partner with artists from outside of Big Hit.

As the first case of the envisioned collaboration, Seventeen, an outside boy band, will open its mobile fan community on Big Hit's app-based platform Weverse, where BTS and other Big Hit artists currently operate fan communities.

Also in 2020, Big Hit will unveil a series of entertainment contents featuring BTS, including a drama series, a computer game, a book series and a Korean language education video program.

The video, Learn Korean with BTS, will use previous video clips of BTS members to provide language education content. It will be made available in March, Big Hit said.

"I will strive to help the three major pillars of the music industry -- fans, artists and companies -- grow together fairly and soundly," Bang said.

As for the recurring rumors of Big Hit's possible stock listing, he said "nothing has been fixed as of now."