SEOUL, Feb. 6 (Yonhap) -- Around 920 soldiers remained quarantined Thursday as part of efforts to prevent the spread of the new coronavirus to barracks, the defense ministry said.

The quarantined soldiers have either visited China, Hong Kong or Macao in the past 14 days or had contact with people who traveled to those places.

"No suspected or confirmed cases have been reported among service personnel," ministry spokesperson Choi Hyun-soo said, adding that the authorities have been fully implementing diverse measures against the virus.

As of early Thursday, South Korea had 23 confirmed cases.

A civilian worker for the Navy tested negative for the new coronavirus but will remain quarantined until after the incubation period, according to the ministry.

The Navy worker was put into isolation and underwent a coronavirus test after a 38-year-old man he ate together with last month was confirmed Wednesday to have the virus. Six other Navy personnel, who shared the same office with him, were also quarantined. None of the seven have shown any symptoms.

Asked about any plans to modify wintertime drills that often include loaded marches, spokesperson Choi said that the military has been trying to limit the chances of soldiers having contact with civilians while carrying out drills at barracks as planned.

Choi also said the ministry will monitor developments to determine whether to ban soldiers from visiting not only China but also other foreign countries.

Currently, service personnel are banned from visiting China, as the virus is believed to have originated from its central city of Wuhan. But calls for tighter control have grown as two patients in South Korea contracted the virus after visits to Singapore. 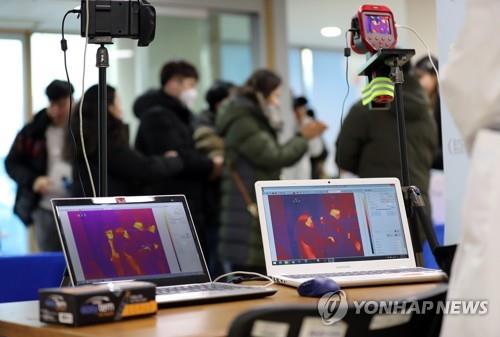