SEOUL, Feb. 7 (Yonhap) -- Hyundai Motor Group Chairman Chung Mong-koo will become the first South Korean inducted into the U.S. Automotive Hall of Fame, for his contribution to the advancement of the auto industry, the company said Friday.

The Automotive Hall of Fame, established in 1939 as the automobile industry's top honor, has honored nearly 800 business leaders from around the world.

"Induction into the Automotive Hall of Fame is reserved for individuals who have created, shaped, and changed the mobility market. These individuals have exceeded in a way that stands out from their peers -- they are responsible for a step change in innovation, business operations, and impact on consumers and the public," Hall of Fame President Sarah Cook said in a statement. 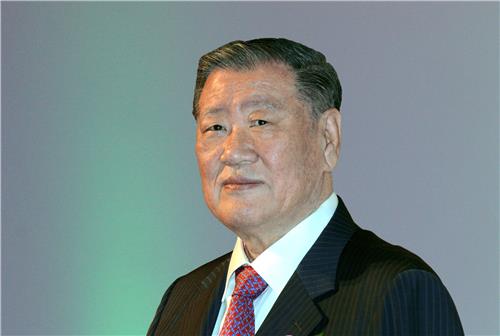 Through Chung's leadership, Hyundai Motor Group rapidly expanded to compete with the world's leading carmakers. As a result, his efforts affected lasting change in the global automotive landscape and the Korean economy, according to the Automotive Hall of Fame.

Chung is noted for many remarkable accomplishments, including spearheading the group's growth with new plants in key regions, including the United States, Europe, China, India, Brazil and Russia, and creating a highly efficient vertically integrated business structure that produces everything from steel to vehicles, the organization said.

The Automotive Hall of Fame's 2020 Inductees include Chung Mong-koo; Thomas Gallagher, former CEO of Genuine Parts Company; Jay Leno, automotive heritage leadership through his Jay Leno's Garage series on CNBC; and Helene Rother, one of the first women in automotive interior design for General Motors; Nash Motors; and others.

The 2020 induction and the awards ceremony will be held July 23 in Michigan, Hyundai said.