SEOUL/SUWON, South Korea, Feb. 8 (Yonhap) -- The spread of the new coronavirus has shut down soup kitchens in South Korea, dealing a blow to homeless people and impoverished senior citizens who rely on free meals.

Religious groups and volunteer organizations have suspended the operation of food kitchens in an effort to help contain the spread of the virus that has infected 24 people here.

Soup kitchens provide warm meals -- mostly a bowl of rice, soup and three side dishes -- twice a day to the homeless.

But the virus outbreak has prompted meal centers to halt such services. Data on how many soup kitchens have closed across the nation is not available. 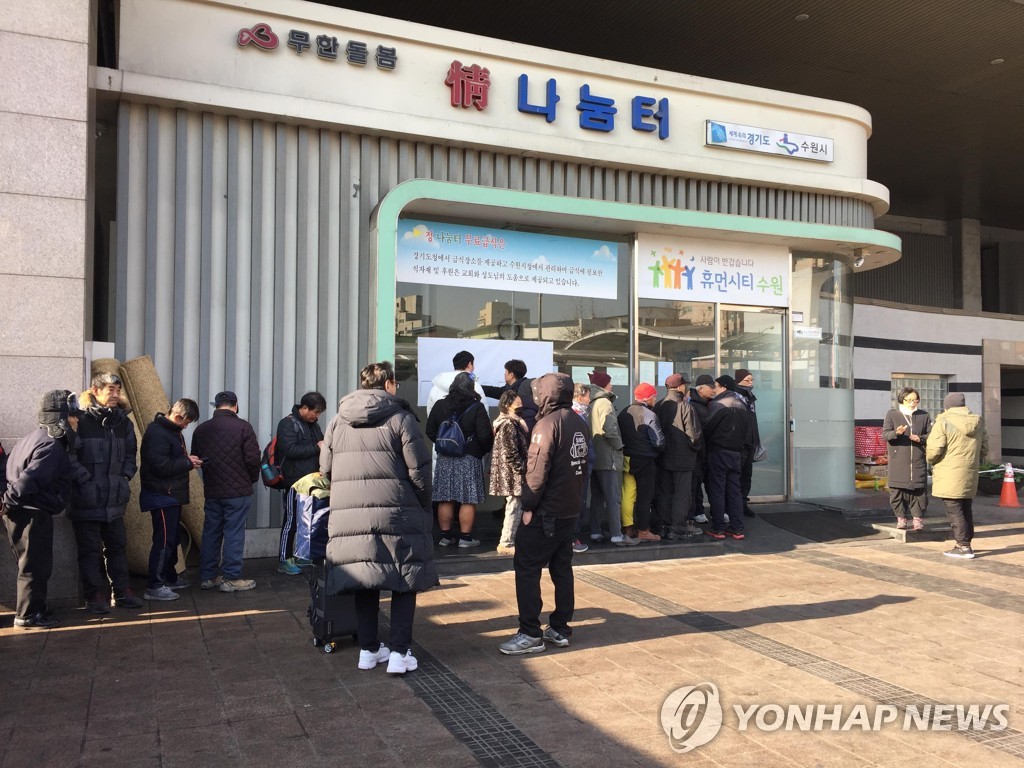 At a temporary shelter in Suwon, a city of 1.24 million people 40 kilometers south of Seoul, around 40 homeless people gathered and ate kimbap and cup noodles on Wednesday.

Some expressed thanks for the provision of the food, but a few complained about not having a full meal.

The homeless living near Suwon Station visit a soup kitchen operated by an Anglican religious group for warm meals. Before the virus outbreak, more than 100 homeless people used the meal center for breakfast and dinner.

But it was suspended on Jan. 30 after the coronavirus was confirmed in a few people who live in or had visited the city.

To support the homeless, the city government has spent 10 million won (US$8,419) in emergency funds to provide box lunches or kimbap.

"We are sorry for providing box lunches due to the new coronavirus," said an official at the homeless support center. "I hope the virus' spread can be contained fast so that the homeless can have warm meals as they did before."

In a similar move, the city government in Gwangmyeong, just southwest of Seoul, put the operation of six soup kitchens providing free meals to hundreds of elderly people on hold.

Instead, it plans to deliver box lunches to those who have used the meal centers.

"The move is aimed at protecting senior citizens who could be vulnerable to the infection," said a city government official.

New virus cases back to over 700, vaccination drive to ramp up