SEOUL, Feb. 7 (Yonhap) -- South Korea and the United States have been preparing for springtime combined exercises as planned despite concerns over the spread of the new coronavirus, officials said Friday, rejecting a news report that the sides are considering postponing the drills.

Citing multiple officials, Japan's Asahi Shimbun reported earlier in the day that Seoul and Washington are reviewing an option of delaying combined drills, which it said are planned for later this month, as part efforts to contain the novel coronavirus as well as not to provoke North Korea.

Regular springtime exercises are supposed to take place in March for about 10 days.

"Currently, we have made preparations to stage the exercises as planned," a military officer said, adding that he has no idea about what exercises the Japanese media pointed to in the article.

Another official said, "Our position is that South Korea and the U.S. will carry out combined exercises in an adjusted manner in close coordination between the two sides" to militarily support diplomatic efforts to denuclearize North Korea, adding that the military authorities have been closely following developments regarding the virus.

Seoul's defense ministry, as well as the U.S. Forces Korea (USFK), have been implementing diverse measures to prevent the spread of the virus into barracks. As of Friday, South Korea has 24 confirmed cases of the virus, though no confirmed or suspected cases were reported among service personnel.

According to military sources, the allies will stage a computer-simulated "combined command post training (CCPT)" for about 10 days in March, which is to be followed by Crisis Management Staff Training (CMST).

Though the two sides had held their large-scale springtime exercises of Key Resolve and Foal Eagle maneuvers until 2018, the allies replaced them with a command post exercise last year named Dong Maeng without field maneuvers amid peace efforts involving North Korea.

This year's springtime exercises are expected to be similar to the one staged last year in general, though details, such as their name and duration, are subject to change, the sources said. 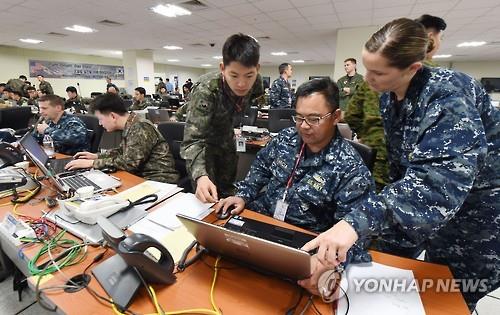