He received Koji Tomita's credentials in a ceremony that was also attended by China's new top envoy here, Xing Haiming. They then had a closed-door tea meeting.

Moon told Tomita, "I know that Prime Minister Abe said he'd like to have a relationship (in which we) meet more often. I have the same idea," according to Han Jung-woo, director of Cheong Wa Dae's Chunchugwan press center.

Moon added that South Korea and Japan, as close neighbors, should strengthen cooperation at a time when the global economy is in difficulty.

He expressed hope that the two sides will pool their wisdom and find a resolution to their history-related row for the sake of future generations.

He asked the ambassador to bear it in mind while serving here.

Moon also told him that the South Korean government will do its best for the success of the upcoming Tokyo Olympics, recalling Abe's attendance at the opening ceremony of the 2018 PyeongChang Winter Olympic games. 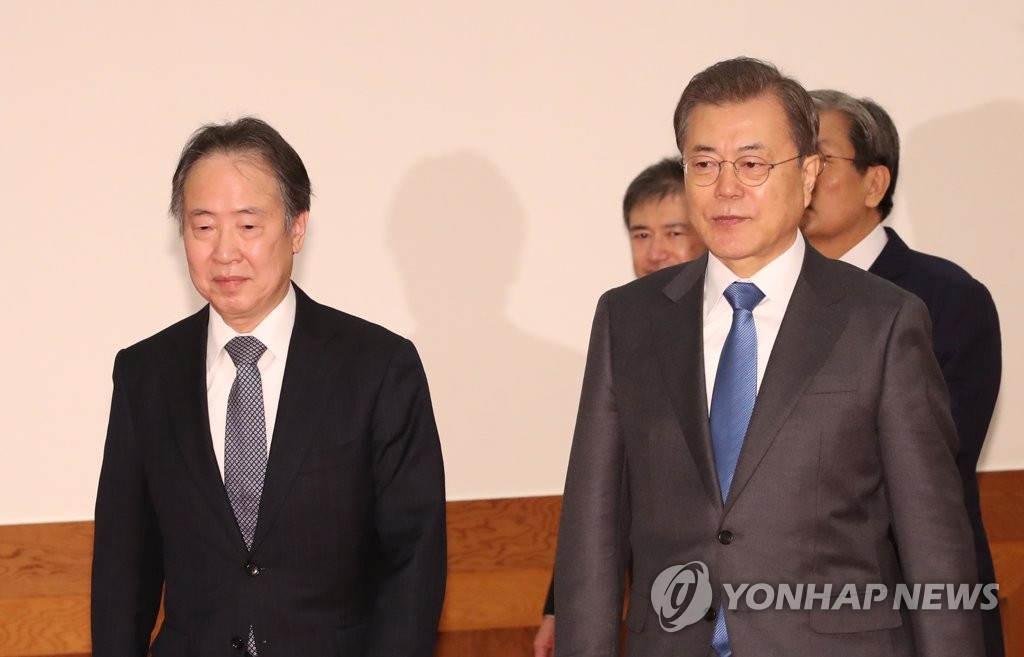 Moon pointed out that this year's trilateral summit between the three Northeast Asian powers is slated to be held in South Korea, potentially leading to brisker high-level exchanges among them.

He said it is important as well for Seoul and Tokyo to share information related to responding to a new coronavirus spreading through the region.

Tomita agreed that it is crucial to improve the relationship between the leaders of the two countries.

He said he would make efforts for Moon and Abe to have frequent talks.

The leaders had their latest talks in China last December on the sidelines of a three-way summit.

The ambassador said he would focus efforts on following up on their summit agreement on a joint push for resolving pending issues via dialogue.

Seoul-Tokyo relations have been at one of their lowest ebbs since Japan imposed export curbs against South Korean firms in July last year, apparently over a wartime forced labor compensation issue.