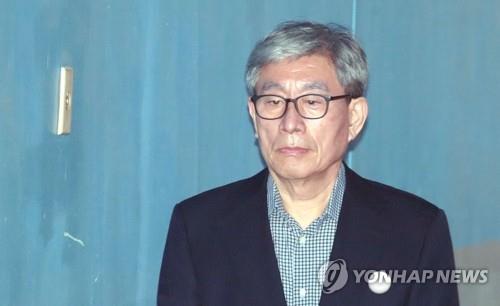 Won's additional indictments came after the Moon Jae-in administration launched a reinvestigation into the NIS' past wrongdoings following Moon's inauguration in May 2017.

In the previous court hearing held last December, prosecutors demanded an imprisonment of 15 years, a forfeit of 19.83 billion won (US$16.7 million) and suspension of qualifications for 10 years. Won claimed innocence in that hearing, saying he was not involved in the alleged illegal acts and that those acts cannot be punished criminally.

But the Seoul court didn't order a forfeit for Won, saying that it is difficult to confirm he had personally used money embezzled from state coffers.

Prosecutors had reopened the investigation into Won after an internal NIS probe found documents that suggest the spy agency ran 30 cyberteams and spent billions of won in taxpayer money to pay civilians and NIS retirees hired to write disparaging internet comments about liberal figures.