SEOUL, Feb. 8 (Yonhap) -- South Korea's government said Saturday it will provide 1.23 million won (US$1,030) per month to a four-person family with a member in quarantine, as part of its efforts to compensate people who cooperate with the ongoing effort to stem the spread of the novel coronavirus.

The health ministry said that the monthly living expenses allowance will be provided to anyone who has been in quarantine for more than 14 days, with foreign nationals also eligible for support.

If a person without a family is quarantined, the government said it will provide 454,900 won if that person has been in isolation for two weeks. The total amount will be adjusted to reflect the size of the family, and the period a person is in quarantine. The compensation rules apply to those that are in self-quarantine as well.

"The move is in accordance with the infectious disease control and prevention act and covers minimum living expenses," Vice Health Minister Kim Gang-lip said in a news conference. 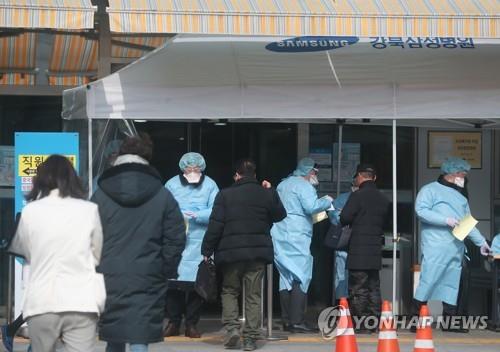 He, however, said those that received paid leave from their companies will not be able to apply for the compensation pay.

As of Saturday, the country has 620 people in quarantine who are undergoing tests to see if they have been infected by the new coronavirus. This is a nearly twofold increase from 327 tallied the day before.

Of the 24 people that have tested positive for the virus so far, four are Chinese nationals with the rest being South Koreans, with no detailed numbers made available on the nationality of people in isolation at present.

People who are eligible for payment can begin applying Feb. 17, with business owners who have to give paid leave to employees to be repaid by the National Pension Service.

The senior official then said that Seoul is in the process of revising existing rules to more harshly punish people who violate their quarantine.

He said a bill has been proposed that will raise the fine that a person can pay from the current 5 million won to a max 20 million won, with violators facing less than one year in prison.

On speculation that the government will send another chartered flight to Wuhan, Kim said there are no specific plans at present. The country already airlifted 701 South Korean nationals from the Chinese city on Jan. 31 and last Saturday, with those brought back being housed in state facilities.