SEOUL, Feb. 9 (Yonhap) -- South Korea will tighten quarantine checks on entrants from countries other than China that have reported community infections of the new coronavirus, the government said Sunday, as part of stepped-up efforts to contain the potentially deadly disease.

Prime Minister Chung Sye-kyun announced the measure as South Korea has seen a rapid growth of infections, reporting three additional confirmed cases on Sunday, with the total number of infections reaching 27 since the first reported case on Jan. 20.

"We will find suspected patients at an early stage by providing their travel records to medical institutions," he told an emergency government meeting.

The government will also consider further limiting the entry of people from China, possibly including those who have visited other regions besides Hubei province, where Wuhan city, the epicenter of the virus outbreak, is located.

"We will additionally consider taking measures to limit the entry from other risky regions within China where they have reported many patients," Chung said.

South Korea has so far banned the entry of foreigners who have traveled to Hubei province in recent weeks.

Chung also said that South Korea is working to send a third chartered flight to Wuhan to evacuate some 200 remaining South Korean nationals and their families out of the city.

Seoul has evacuated 701 nationals from Wuhan via two emergency flights as the virus has swept fast across the globe.

The South Korean consulate in Wuhan said earlier that it was in talks with Chinese authorities to arrange another evacuation flight for the family members of South Korean citizens as well. The two previous flights could not bring them to Seoul as Beijing did not allow an evacuation of people who hold Chinese citizenship.

South Korea has tested 2,340 people for the new virus as of 1 p.m. Sunday since Jan. 3, up from 2,097 tallied at 4 p.m. the previous day, the Korea Centers for Disease Control and Prevention said on its webpage, adding it was checking 960 people.

Three patients have been discharged from hospitals after making full recoveries.

Regarding the national crisis warning level, Chung said the government intends to maintain the current level of "alert", citing low fatalities and that the infected patients have been managed under the control of the government quarantine system. 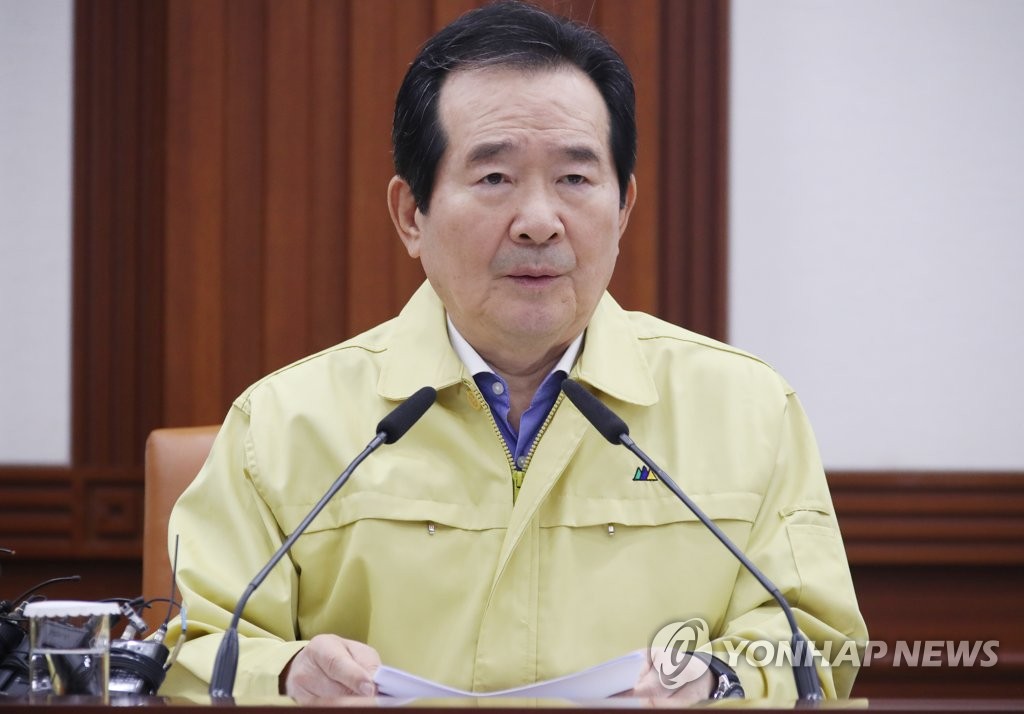 (LEAD) S. Korea to tighten quarantine for entrants from countries besides China: PM

(LEAD) S. Korea to tighten quarantine for entrants from countries besides China: PM