A total of 961 major local equity funds had a combined 54.3 trillion won under their management as of Friday, down slightly over 2 trillion won from the start of the year, according to FnGuide.

The outflow comes as growing concerns over the spread of the potentially deadly virus have chilled investor sentiment and stoked flight to safety.

The virus, which is believed to have originated in the Chinese city of Wuhan, has claimed more than 900 lives in China. As of Monday, South Korea had 27 confirmed cases with no deaths reported. 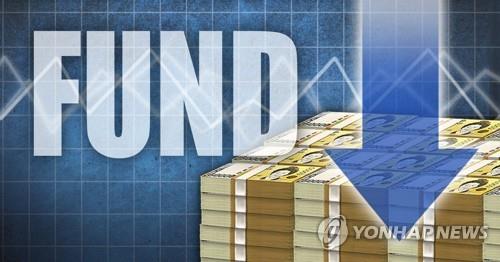 "The spread of the coronavirus has prompted investors to seek traditional safe assets, such as bonds and gold, since mid-January, while making them take in profits," an analyst said.

In contrast, 781 overseas stock funds posted a net inflow of some 27 billion won during the period, with those for Chinese equities chalking up a net outflow of 223.4 billion won.

As of Monday, the benchmark Korea Composite Stock Price Index (KOSPI) was up 0.65 percent from the start of the year amid a seesaw run, with the secondary KOSDAQ price index rising 0.42 percent over the cited period.

Domestic bond funds, meanwhile, chalked up a net inflow of 262.6 billion won over the cited period as investors turned risk-averse, according to FnGuide.
(END)