SEOUL, Feb. 10 (Yonhap) -- About 1,100 soldiers are quarantined as part of efforts to prevent the new coronavirus from spreading into barracks, the defense ministry said Monday.

"No confirmed or suspected cases have been reported among our service personnel. We've been thoroughly implementing related preemptive measures," a ministry official said, citing such measures as banning soldiers' trips to China and modifying field trainings.

As of early Monday, South Korea had 27 confirmed cases of the new virus. 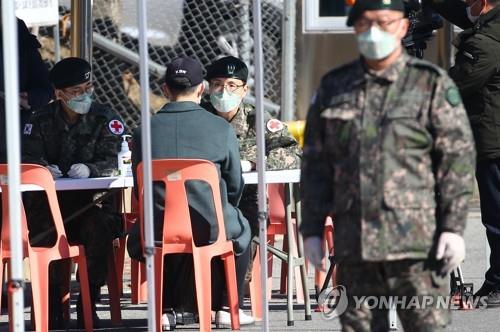 Asked if the ministry has made a decision on whether to take part in the upcoming Cobra Gold multinational exercise as planned, ministry spokesperson Choi Hyun-soo told a regular briefing that the authorities are closely monitoring developments of the outbreak.

"As of now, no changes have been made. We've been keeping close tabs on the current situation," Choi said.

South Korea is scheduled to send about 400 soldiers to the multinational drills set to be held from Feb. 26 through March 6 in Thailand, which is expected to bring together more than two dozen countries, including the United States, Japan and Singapore.

But officials have said it is reviewing the plan due to the novel coronavirus that has swept through Asia.

Meanwhile, Defense Minister Jeong Kyeong-doo visited the Korea Defense Language Institute in Icheon, 80 kilometers southeast of Seoul, and checked facilities there, as it will house South Korean evacuees from the Chinese city of Wuhan, according to the ministry.

Seoul plans to send a third evacuation flight to the virus-hit city on Tuesday to bring back about 150 of its citizens and their Chinese family members.

Around nine service personnel and officials of the institute will be joined by central government officials to support the people for 14 days -- the virus' incubation period -- the ministry noted.

"We will make utmost efforts to help the people from Wuhan return to their families after staying healthy and safe here," Jeong said.