SEOUL, Feb. 10 (Yonhap) -- South Korea will consider a series of measures to help airlines weather the impact of the spreading coronavirus, the transport ministry said Monday.

In a meeting with airline business leaders, Transport Minister Kim Hyun-mee said the government plans to take administrative measures to not only allow airlines to change their business plans and set up alternative routes to offset lower demand on Chinese routes but also to allow them to operate irregular flight schedules depending on market demand. 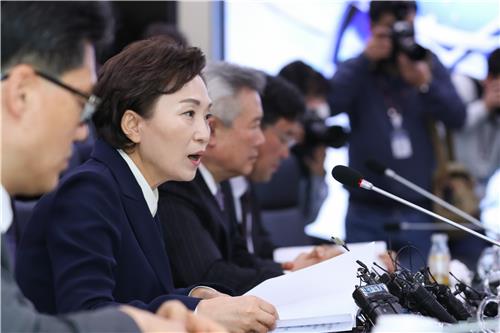 Given the number of airlines has jumped nearly fivefold since 2003, from two full-service carriers to nine airlines now, and the number of international air passengers is four times higher, the airline business is likely to face a bigger blow from the deadly coronavirus, the minister said.

The government will adopt other measures to have airlines delay their payments for the use of airports and related facilities or pay lower usage fees depending on the level of the virus' impact on their operations, the minister said.

Eight of the country's nine airline companies sharply reduced the number of their combined flights to China to 162 per week on 59 routes to China in the second week of February, down 70 percent from 546 on the same routes in the first week of January, the Ministry of Land, Infrastructure and Transport said in a statement.

Fly Gangwon operates two routes from Yangyang, Gangwon Province, to Taipei and Jeju Island -- which are currently not affected by the deadly virus.

Two more budget carriers -- Air Premia Co. and Aero K Airlines Co. -- are expected to enter the market later this year after obtaining approval from the transport ministry over the safety of their planes, bringing the country's total number of LCCs to nine.

Starting this month, airlines began to suspend some of their flights on Chinese routes or reduce the number of flights to China due to a sharp decline in travel demand to the neighboring country.