SEOUL, Feb. 10 (Yonhap) -- The United Nations Command (UNC) has been highlighting the swift way it has been approving Demilitarized Zone (DMZ) entry requests from South Korea's government amid calls for improvement in its handling of the issue.

The command, which has jurisdiction over the DMZ that separates the two Koreas, said in a Facebook post on Sunday that it approved and coordinated "the short notice request from the ROK government" to support the PyeongChang Peace Forum's visit to Observation Post 717 (OP Geumgang) inside the DMZ the previous day.

The three-day global forum on peace began in the alpine city of PyeongChang, Gangwon Province, on Sunday, bringing together some 1,000 officials and experts from at home and abroad.

The latest one followed a similar post uploaded last week, which said that the UNC approved a "short-notice and urgent access request" for the Seoul government's entry into the DMZ to assess the situation of African swine fever (ASF).

Such emphases came at a time when calls have grown for the amendment of UNC regulations on passage through the DMZ since last year to spur inter-Korean exchanges, among others, after the command reportedly rejected several South Korean requests to access the area for nonmilitary purposes.

For one, the command blocked Seoul from moving materials through the zone that separate the two Koreas for a joint railway survey in the North, though it later allowed the entry.

The UNC, however, has said that it only denies access to the DMZ when the submitted requests do not include all the required information or seek to gain access to unsafe or unsecured areas within the zone.

The U.S.-led UNC is an enforcer of the armistice agreement that halted the 1950-53 Korean War. 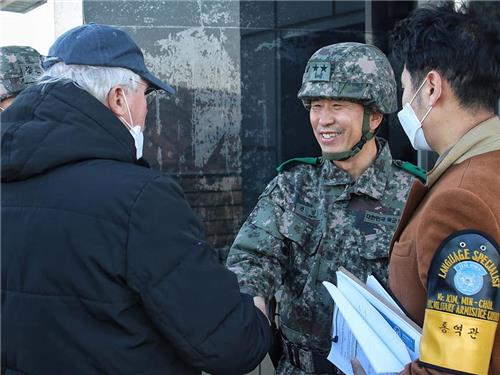