SEOUL, Feb. 10 (Yonhap) -- South Korea and Japan held working-level policy consultations on a volatile Middle East in Seoul on Monday, the foreign ministry said, in a sign of their continued diplomatic cooperation despite their row over trade and wartime history.

Hong Jin-wook, the ministry's director-general for Africa and Middle East affairs, met his Japanese counterpart, Katsuhiko Takahashi, for the talks held annually by the two sides since 2014.

Their meeting came amid tensions in the Middle East caused by a confrontation between the United States and Iran earlier this year and a controversy over U.S. President Donald Trump's proposed peace plan for the region, which critics said has tilted in favor of Israel's interests.

"The two sides have shared the understanding that peace and stability in the Middle East is directly linked to stability for the whole of the international community, including Northeast Asia," the ministry said in a press release.

"The two countries, which have similar perspectives regarding Middle East issues, have agreed to continue communication and cooperation," it added.

Last Thursday, the two countries held a separate director general-level meeting to discuss the dispute surrounding the issue of Japan's wartime forced labor. But they made little progress in addressing the row.

Seoul has used the talks to call on Tokyo to retract export curbs that are seen as retaliation for 2018 South Korean Supreme Court rulings ordering Japanese firms to compensate victims of forced labor during Japan's 1910-45 colonial rule.

Tokyo claims that all reparation issues stemming from its colonization of the peninsula were settled in a 1965 pact that normalized bilateral ties. 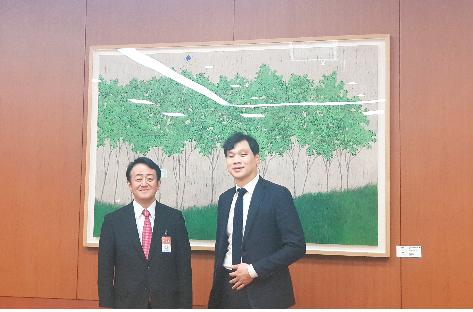