SEOUL, Feb. 10 (Yonhap) -- Director Bong Joon-ho of "Parasite" anticipates a future in which world cinema is so connected and diverse that a non-English-language winner of the Oscar for best picture will not make news any longer.

The South Korean dark comedy on class division made movie history on Sunday (U.S. time) by becoming the first foreign-language movie to earn the top honor, along with the director, original screenplay and international feature film prizes.

In a news conference after the ceremony, he reminded reporters of a request he made during this year's Golden Globe Awards for American viewers to "overcome the one-inch-tall barrier of subtitles."

"During the Golden Globes, I mentioned the one-inch barrier of subtitles, but I feel like that was already a little late," Bong told journalists backstage at the Dolby Theater in Los Angeles.

"People were already overcoming this barrier through streaming services, YouTube videos and social media. In the environment we currently live in, I think we are all connected. So I think naturally we will come to the day when a foreign-language film or not doesn't really matter, and a foreign-language film winning this won't be much of an issue later on hopefully," he said through a translator.

He attributed the movie's appeal to its uniquely Korean character.

"My previous film 'Okja' was a co-production between Korea and the U.S., but 'Parasite,' which is a purely Korean film, has garnered more enthusiasm from audiences of all over the world. That's making me think that perhaps the deeper I delve into things that are around me, the broader the story can become and the more appeal it can have to an international audience," he said. 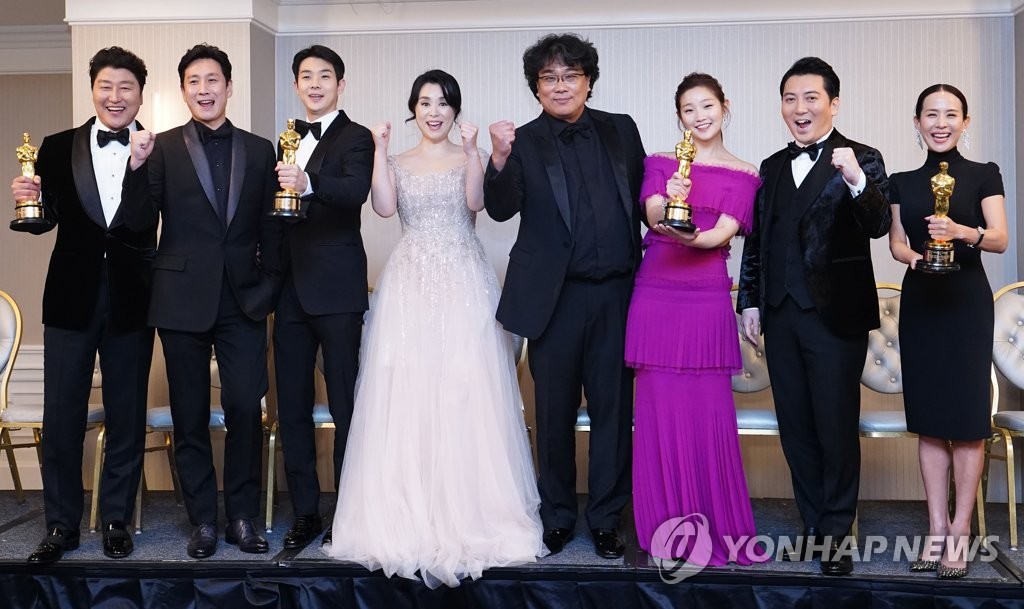 Bong expressed his respect for legendary director Martin Scorsese, whose film "The Irishman" failed to get any awards.

"I've seen Martin Scorsese (lose) this award multiple times, and he didn't know me back then, but I was so frustrated. I remember when he won one for "The Departed" (2006) I was so excited. Being nominated with him is a huge honor, and it's hard to believe," he said.

Asked whether he would advance into Hollywood, he replied, "I have a plan," using the famous line from "Parasite."

"Regardless of what happened at Cannes and (the) Oscars, I have been working on two projects before then. I'm continuing work on them and nothing has changed because of these awards. One is in Korean, and one is in English," he said.
(END)