VERO BEACH, United States, Feb. 10 (Yonhap) -- This February has been unlike any other that Nick Kingham has spent as a professional pitcher.

The American right-hander has gone from being a major league prospect trying to win a big club job to getting anointed as the No. 1 starter on the SK Wyverns, a perennial contender in the Korea Baseball Organization (KBO), even before throwing a pitch for them. It's a different kind of pressure for Kingham, one that the 28-year-old embraces wholeheartedly.

"I am proud to be No. 1 and I am humbled that they chose me," Kingham said Monday after practice at Jackie Robinson Training Complex in Vero Beach on the eastern part of Florida. The former Pittsburgh Pirates draft pick, who also spent time with the Toronto Blue Jays, signed a one-year deal worth US$900,000 with the Wyverns last November.

"(The No. 1 job) comes with responsibility. I am ready to take the demands that this position holds," he added. "It's an awesome feeling to come here and have people rely upon you. I will uphold those standard and demands to the best of my ability."

And in Kingham's own words, his ability to throw multiple pitches "at any count" is his biggest weapon. He throws both four-seam and two-seam fastballs, plus changeup, curveball, slider and cutter.

He must remain effective with those pitches if he were to fill in the void left by the departure of Kim Kwang-hyun, the former No. 1 starter and franchise icon who signed with the St. Louis Cardinals in December. 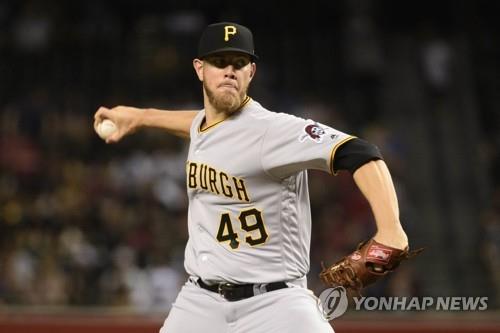 Kingham said he has a few friends who've played and enjoyed success in the KBO, most notably former Doosan Bears right-hander Josh Lindblom. Kingham and Lindblom were minor league teammates in the Pirates' system in 2017. Lindblom had spent the two previous years in the KBO and pitched the first half of 2017 in the United State before returning to South Korea. Kingham heard nothing but positive things about the Korean league from Lindblom and called him "the main drive" behind his decision to take his talent to the KBO.

Lindblom won the KBO regular season MVP title in 2019 and parlayed his recent success into a major league deal with the Milwaukee Brewers this off-season.

Kingham, who is four years younger than Lindblom, would obviously like to follow in his friend's footsteps to the majors, but it's not an immediate concern for him.

"If (a major league opportunity) presents itself, absolutely," Kingham said, when asked if a return to the bigs was his ultimate goal. "It's a goal in a way but it's not at the forefront at all. I am here to play baseball for SK. I know it sounds cheesy, but this is where I am at, whether it's one year or 10 years. I want to be here as long as they want me."