Samsung will introduce its new flagship smartphone, supposedly named the Galaxy S20, and a clamshell-like folding phone, expected to be called the Galaxy Z Flip, at the "Galaxy Unpacked 2020" event in San Francisco on Tuesday (U.S. time).

The world's largest smartphone vendor has yet to confirm any information regarding specs of the new phones, but according to industry insiders, the Galaxy S20 series will offer three models -- the Galaxy S20, S20 Plus and S20 Ultra. 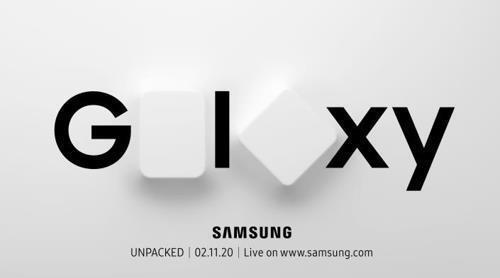 The high-end Galaxy S20 Ultra, which is likely to have a 6.9-inch screen, is expected to sport a quad-camera module, including the industry's best 108-megapixel (MP) primary sensor.

The mid-tier Galaxy S20 Plus and the entry-level Galaxy S20 are forecast to have weaker specs than the S20 Ultra but better features than their predecessors in the Galaxy S10 series.

Market researcher Counterpoint Research recently predicted that Samsung may sell more than 40 million units of the Galaxy S20 series this year with improved device specs and the expansion of 5G networks around the globe.

Samsung will also unveil its new foldable smartphone that bends in half vertically. The company already teased the phone in a TV commercial during the broadcast of the Academy Awards 2020.

The Galaxy Z Flip will be Samsung's second foldable phone after the Galaxy Fold, which opens horizontally like a book.

Its folding display is rumored to be made of glass instead of the plastic that is used in other foldable phones currently sold in the market. The Galaxy Z Flip is expected to have a 6.7-inch screen.

Samsung hopes new phones can solidify their top status in the global smartphone market. The company took more than a 20 percent market share in 2019, according to data from market researcher Strategy Analytics, beating rivals like Huawei and Apple.

The company also hopes that new handsets can boost its profitability in its mobile business.