The country's exports stood at US$10.7 billion in the Feb. 1-10 period, compared with $4.38 billion in the same period last year, according to the Korea Customs Service.

By product, exports of cars and semiconductors soared 114.5 percent and 37.8 percent, respectively.

However, the average daily exports -- which reflect working days -- fell 3.2 percent on-year in the first 10 days of February, the data showed. 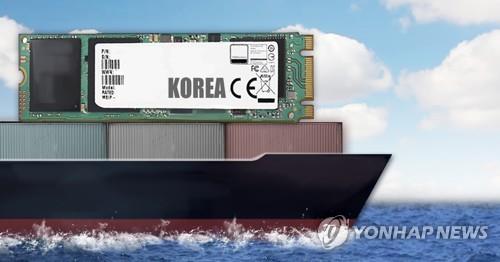 By destination, South Korea's exports to China and the United States rose 36 percent and 68.1 percent, respectively.

South Korea imported goods worth $12 billion in the 10-day period, up 23 percent from a year earlier.

Exports fell at a slower-than-expected pace in January, but extended the slump to a 14th consecutive month due to weaker demand for chips.

Outbound shipments came to $43.35 billion last month, down 6.1 percent from $46.17 billion a year earlier, according to the government data.

South Korea's exports fell 10.3 percent in 2019, hit by a slump in the global chip market, coupled with the trade feud between the U.S. and China. It marked the first time in 10 years for the annual exports to drop by a two-digit rate.