The Busan Main Customs said it has arrested three people, including a 73-year-old Seoul man, and put a 43-year-old man on a wanted list on charges of smuggling 700,000 cigarette packs, worth about 3.1 billion won (US$2.61 million), into the southern South Korean port last December.

The customs office said 450,000 cigarette packs were seized in the bust, with the remaining 250,000 packs already in circulation. It noted the volume is the largest ever seizure of cigarettes from a single smuggling case busted in the nation. 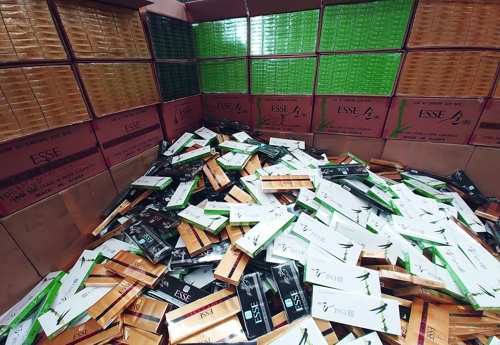 The four are accused of buying the 700,000 packs exported to Hong Kong in 2018 and transporting them to Malaysia before disguising them as a transshipment cargo of fabric bound for Russia via Busan. They allegedly smuggled the cigarettes into South Korea during a port call in Busan last December, taking advantage of loose customs inspection of transshipment cargo.

The office said the four suspects committed the massive trafficking to capitalize on the substantial price gap between cigarettes for domestic consumption and exports.

For instance, Esse, a South Korean brand, sells for 4,500 won per pack here, with its export price reaching just 1,000 won per pack.

The trafficking ring could have pocketed 560 million won, if their smuggling operation were successful, and inflicted a loss of 2.3 billion won on state coffers, the office explained.

It added all the seized cigarettes will be destroyed.