SEOUL, Feb. 12 (Yonhap) -- Samsung Electronics Co. on Wednesday unveiled its new flagship smartphone lineup and a vertically folding handset in a move to solidify its top status in the global mobile industry with premium products.

The Galaxy S20 series and the Galaxy Z Flip were introduced at the company's Galaxy Unpacked 2020 event in San Francisco on Tuesday (U.S. time).

Instead of following its usual naming sequence for the flagship line, Samsung decided to ditch the name Galaxy S11, apparently emphasizing the level of upgrades and its vision to offer a new consumer experience.

"We're so proud to introduce the newest member of the Galaxy family," said Roh Tae-moon, President and Head of Samsung's mobile communications business. "A new phone named for the start of a bold new decade of change. A phone that says good bye to your camera that you know today." 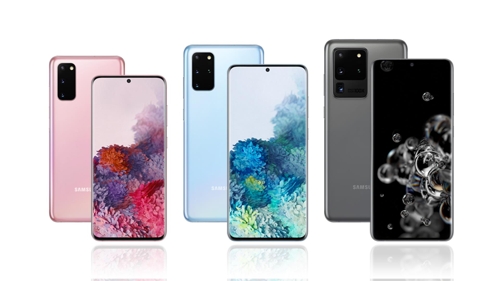 All three Galaxy S20 phones have bigger screens, upgraded cameras and increased battery capacities than their predecessors in the Galaxy S10 series.

In particular, high-end Galaxy S20 Ultra features the industry's best set of specs, with a rear quad-camera system that includes a 108-megapixel (MP) primary sensor and a 48-MP telephoto sensor that will support up to 100x digital zoom. It also carries a 12-MP ultrawide camera for panorama shots and a time-of-flight (ToF) 3D sensor for depth effects.

The mid-tier Galaxy S20 Plus, successor to the Galaxy S10, also sports a quad-camera system, but it is equipped with a 12-MP main camera, and a 64-MP telephoto sensor that can offer up to 30x zoom in digital. It will also have a 12-MP ultrawide camera and a ToF sensor.

The entry-level Galaxy S20, equivalent to the Galaxy S10e in the previous line, will have a triple rear-camera setup with all specs the same as the S20 Plus without the fourth camera for ToF.

Their rear-camera modules, also offering 8K video recording, are placed on the left corner of the handset, which is a noticeable design change from the Galaxy S10 series, which placed rear-facing cameras on the center of the device.

When it comes to selfie cameras, the Galaxy S20 Ultra offers a high resolution 40-MP wide front camera, while the other two settle for a 10-MP camera.

Like its previous generation, the Galaxy S20 series opted to have a hole-punch cutout on Samsung's Infinity O-display for the front-facing camera, although it is now placed at the top center.

The display of the Galaxy S20 also offers a 120Hz screen refresh rate, which provides smoother animations and scrolling.

The Galaxy S20 range offers a minimum of 12GB RAM, with up to 16GB in the S20 Ultra. While the entry-level S20 has a 128GB base storage option, the mid-tier S20 Plus and S20 Ultra also come with a 512GB version. All phones will support micro SD card expansion up to 1TB.

Samsung said the Galaxy S20 series will be launched on March 6. Pre-orders in South Korea will be available between Feb. 20 and 26.

The Galaxy Z Flip is Samsung's second foldable phone after the Galaxy Fold that was launched last year.

Unlike the Galaxy Fold that opens horizontally, like a book, the Galaxy Z Flip bends in half vertically, making it fit into a pocket.

The Galaxy Z Flip, only available in 4G, comes with a 6.7-inch foldable main display and a 1.1-inch cover display on the front of the device that allows users to check time and other notifications. It features two 12-MP rear cameras and a 10-MP front-facing camera.

Samsung said the Galaxy Z Flip will hit the market on Friday, starting with South Korea and the United States.

It will be sold for 1.65 million won (US$1,400) in South Korea and available in two colors: mirror purple and mirror black.

Alongside the new smartphones, Samsung also introduced an upgraded version of its wireless earbuds, the Galaxy Buds Plus, which offers 11 hours of battery life on a single charge. 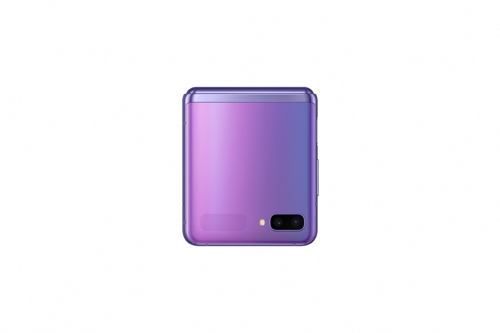 Samsung hopes the new phones can defend its No. 1 status in the global smartphone market.

The South Korean tech giant took a 20.9-percent market share in 2019, according to data from market researcher Strategy Analytics, beating rivals like Huawei Technologies Co. of China with 17 percent and Apple Inc. with 14 percent.

According to market researcher Counterpoint Research, Samsung is expected to sell more than 40 million units of the Galaxy S20 series this year thanks to its improved device specs and the expansion of 5G networks around the globe. That would be roughly 10 percent more than sales of the Galaxy S10 series in its debut year.

The South Korean tech giant will also try to beat Huawei in the 5G smartphone market as the Galaxy S20 smartphones all come with 5G variants.

Samsung was the runner-up in the global 5G smartphone market last year with a 35.8-percent share, according to Strategy Analytics data, which was 1.1 percentage points behind Huawei.

The company also hopes new handsets can boost profitability in its mobile business, although marketing costs for the latest products are likely to be high for a while.