He also said it's time to begin a policy review in earnest on extending the retirement age in response to a sharp reduction in the working-age population, receiving a report from the labor, agriculture and environment ministries on their major policies this year.

Chances are high, Moon said, that the viral outbreak will weigh on the conditions for creating jobs, with manufacturing, tourism and service industries tied with China already affected.

"Above all, it is important to increase employment creation in the civilian sector. It is companies, after all, that make decent jobs," he stressed in his opening remarks at the Cheong Wa Dae session. "(The government) will have to focus more efforts on invigorating the civilian sector with the public sector serving as priming water." 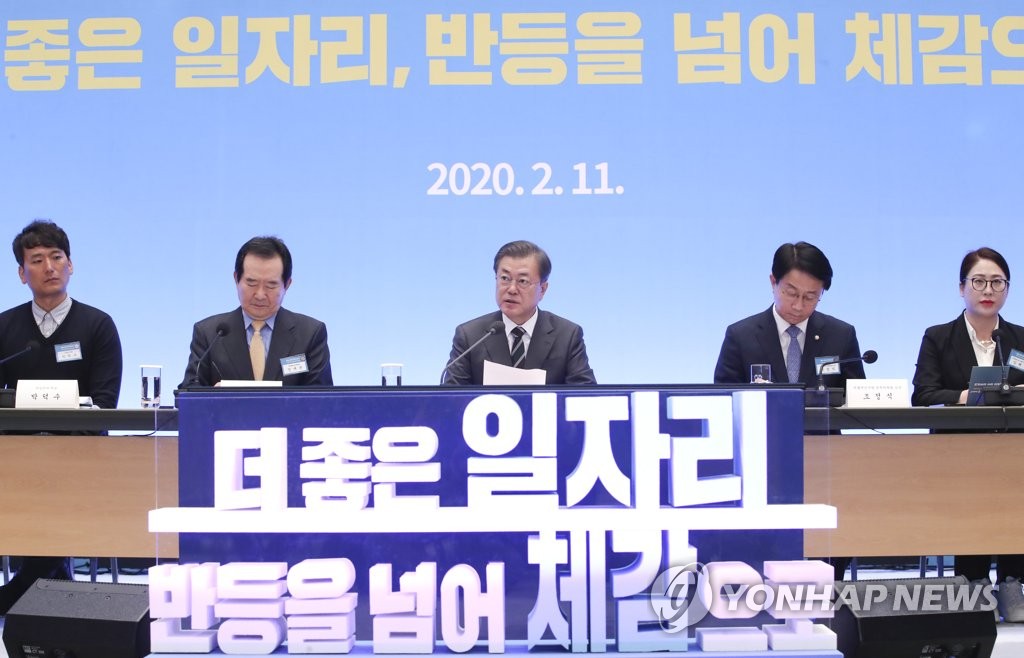 He stressed the need for injecting vigor into the manufacturing field through the expansion of regulatory reform and investment incentives, and raise its productivity and competitiveness.

Critics have accused the liberal Moon administration of pouring taxpayers' money into projects to create public jobs in order to improve numerical data.

Having entered the latter half of his five-year presidency, Moon has set "tangible results" as his policy motto.

He called for tangible fruits from the job creation campaign as well, especially for the youth and those in their 40s.

He also held out expectations that many new jobs will be created in the environmental and agricultural sectors.

"The green industry, which realizes economic and environmental values, will become a more important element in national competitiveness, going forward," he said, instructing the related authorities to make aggressive public investments and lay the groundwork for private ones.