SEOUL, Feb. 11 (Yonhap) -- Seven hundred South Korean nationals who were admitted into two quarantine facilities, south of Seoul, after being evacuated from the Chinese city of Wuhan, the epicenter of the new coronavirus, about two weeks ago, will be released from isolation this weekend, officials said Tuesday.

According to the Ministry of the Interior and Safety, 367 Korean evacuees who were airlifted from the central Chinese city on Jan. 31 on the first chartered flight and have since stayed at two state-run facilities in Asan and Jincheon, both about 90 kilometers south of Seoul, will be released from isolation on Saturday.

On Sunday, 333 Korean nationals, who were flown in from Wuhan on the second chartered plane on Feb. 1, will be discharged from the Asan facility, the ministry, adding they include one South Korean resident who voluntarily entered the facility last week to take care of his two children. 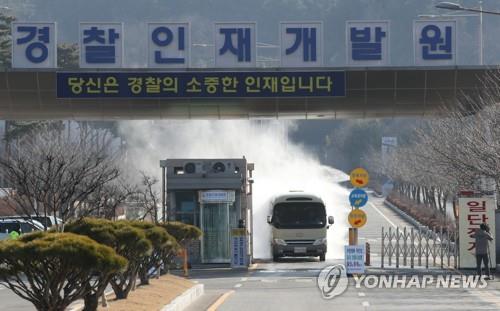 The 700 people will be allowed to head for accommodations of their choice if they test negative for the new coronavirus in the upcoming final checkup, it explained.

The government plans to provide 37 45-seater buses to transport them to five broad areas nationwide -- Seoul, Daegu-Gyeongsang provinces, North Chungcheong-Jeolla provinces, Gyeonggi Province and South Chungcheong Province. They will individually move to their places of residence after being transported to bus terminals or train stations in the five areas.

"Currently, a survey is under way to find out where they want to stay or whether they have any place to reside in South Korea. Gyeonggi Province appears to be the most common place of residence," said a ministry official.

"For those who don't have any proper place to live in the nation, the government will extend help in finding suitable accommodation," the official said.

A total of 111 civil servants, who have also stayed at the Asan and Jincheon facilities to support the Korean evacuees, will also be released from isolation soon, the ministry said, noting wholesale disinfection operations are planned for the two facilities and all waste from them will be incinerated like medical waste.

A total of 31 people were tested for the novel coronavirus after showing suspected symptoms during their stay in Asan and Jincheon and only one of them was diagnosed with the virus.

South Korea is set to send a third evacuation flight to Wuhan on Tuesday night to bring back about 170 of its citizens and their Chinese spouses and immediate family members.

700 Korean evacuees from Wuhan to be released from temporary shelters

700 Korean evacuees from Wuhan to be released from temporary shelters