JUPITER, United States, Feb. 11 (Yonhap) -- It was sunny, hot and humid, with only an occasional breeze, when Kim Kwang-hyun reported to his first spring training session with the St. Louis Cardinals on Tuesday. But given the media circus around him for something as trivial as his walk to the clubhouse, Kim must have felt like being in a fishbowl, rather than out under the blue sky and on the green grass of Roger Dean Chevrolet Stadium in Jupiter, Florida.

The 31-year-old left-hander is trying to take it all in stride. 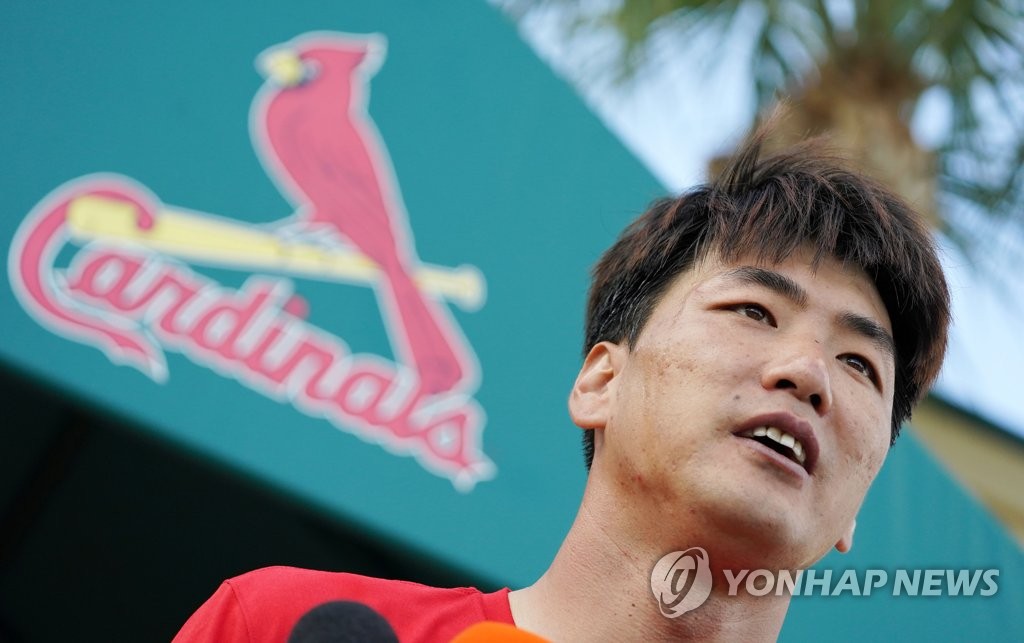 "It was probably worse back home in Korea," Kim quipped with a smile, when asked about the media attention on his first major league camp. He had two different availabilities: first with the South Korean press and then with the Cardinals beat writers. "I'll try not to put extra pressure on myself. I'll just stick to my routine and do the best I can."

Pitchers and catchers reported to the Cardinals' camp Tuesday, with their first official workout set for Wednesday. Kim had his first bullpen session Tuesday, throwing 50 pitches, with a mix of fastball and breaking balls.

"It wasn't perfect, but it wasn't so bad. I am just satisfied that my arm isn't hurting," Kim said. "I wasn't at my 100 percent, but I know my competition will begin in earnest in spring training games, and I'll have to be at my best then."

Kim said pitching on a wide-open bullpen, with cameras set up at all angles, felt a bit strange to him, and it took him a while to get settled in.

"With so many eyes on me, I felt a little overwhelmed early on," he said. "But with time, I'll get used to this kind of environment. I just have to stay focused on what I want to accomplish." 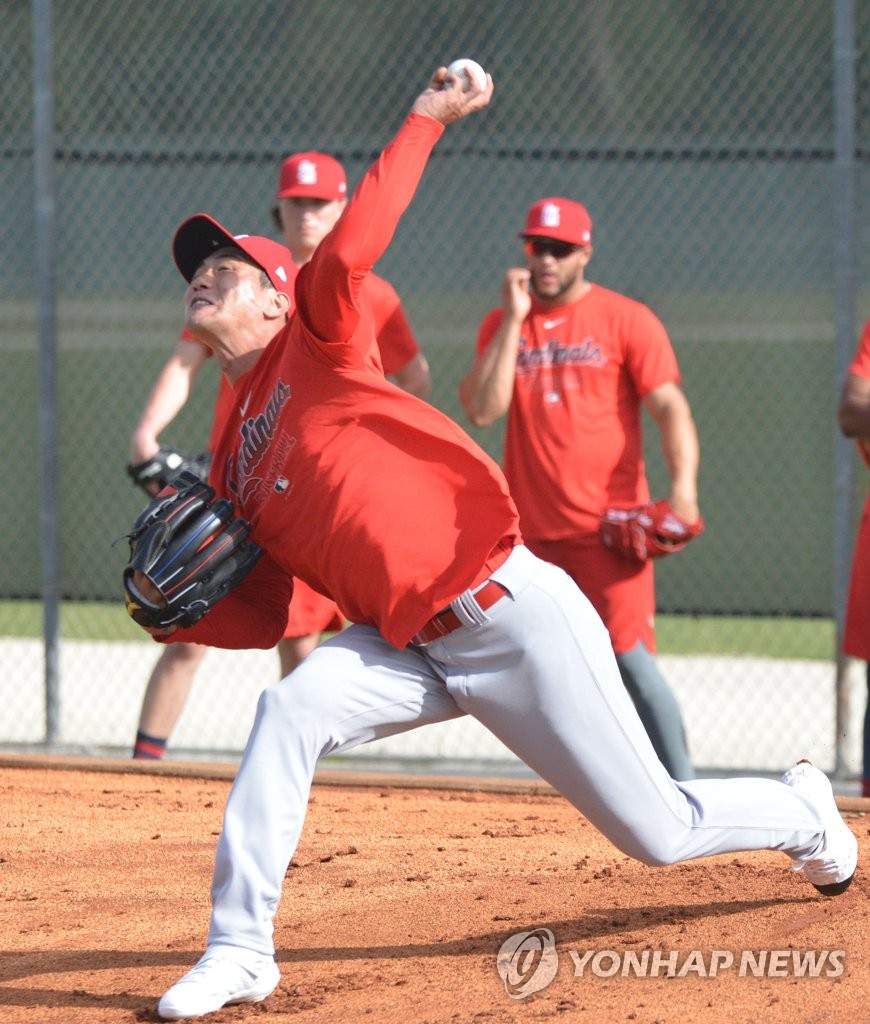 If Kim had chosen to stay put in the KBO and retire there later, his legacy as one of the league's all-time greats would have been quite secure. But Kim said he wanted to challenge himself in the big leagues.

"This is all new to me, and I think it's important to keep taking on new challenges," Kim said. "I am a rookie here, and I'll try to maintain that mindset."

Kim also allowed himself to get ahead and said, "If I make the starting rotation, I'll be pretty excited. I hope I won't embarrass myself out there."

His first name isn't exactly easy on the tongues of Kim's English- and Spanish-speaking teammates. They've given him the moniker "KK," after his family name and the first letter of his first name. The letter "k" is short for strikeouts, and what pitcher wouldn't like to see that letter go up on the scoreboard? 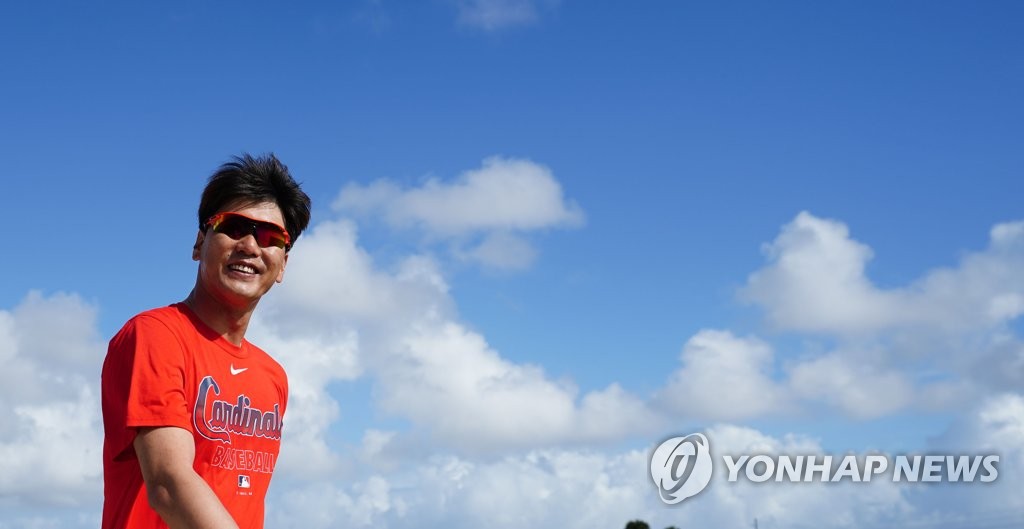 "The guys have been great to me, calling me 'KK' and just playing around," Kim said. "I still have to rely on my interpreter (Craig Choi) to talk with them, and I hope I'll be good enough to carry on casual conversations."

Being in the National League, Kim may have to take an at-bat. He said he borrowed a bat from his former Wyverns teammate Choi Jeong, and added with a grin, "I'll have to give him back 10 bats."

"I don't even know if I'll even be able to make contact," Kim said. "I'll have to step into the batter's box to really see how it all feels out there. I think it'll be frightening to face some of those fastballs." 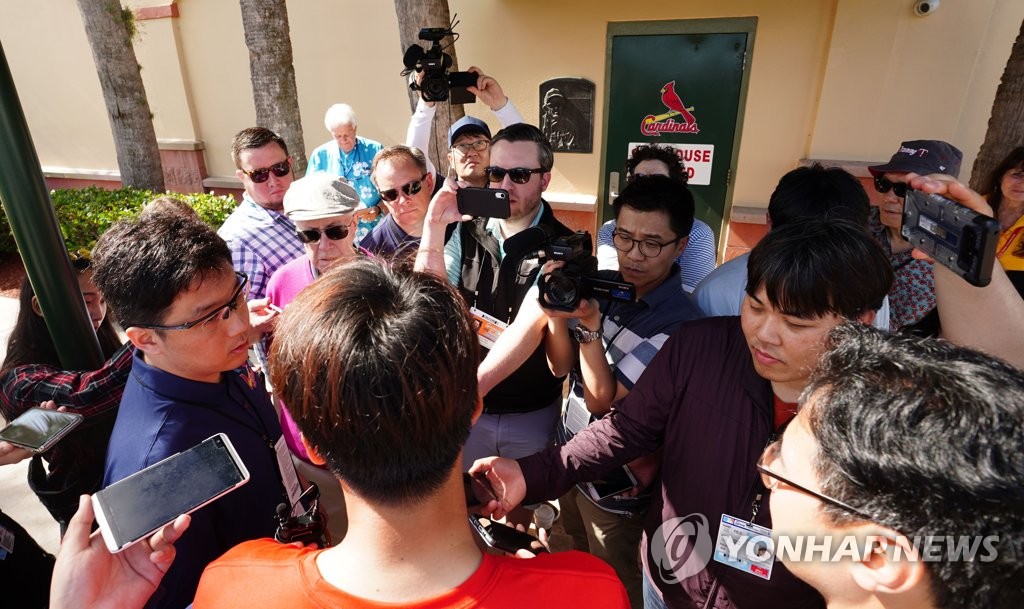