(ATTN: UPDATES throughout with details)
By Kim Deok-hyun

SEJONG, Feb. 12 (Yonhap) -- South Korea's jobless rate fell in January, and job additions hit the highest mark in over five years, on the back of the government's initiative to create more jobs for elderly people, data showed Wednesday.

The unemployment rate decreased 0.4 percentage point on-year to 4.1 percent, and the number of employed people reached 26.8 million in January, according to the data compiled by Statistics Korea.

The unemployment rate for young adults -- those aged between 15 and 29 -- declined to 7.7 percent last month from 8.9 percent tallied a year earlier.

By age, the number of employed people aged 60 and older rose by 506,000 last month, marking the strongest monthly gain since Statistics Korea began compiling such data in 1982.

But the number of employed people aged between 40 and 49 fell by 84,000 in January, according to the data. 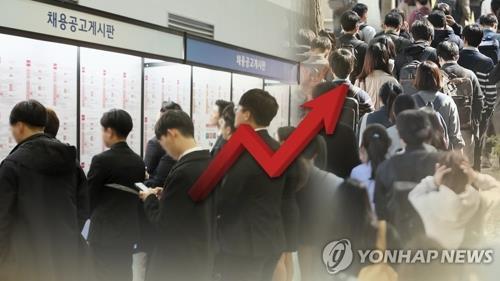 By industry, the health and social welfare sectors added 189,000 jobs, and the transportation segment saw an increase of 92,000 jobs last month.

In contrast, the wholesale and retail sector suffered a decline in job offerings by losing 94,000 jobs in January. The information and telecommunication sector also shed 35,000 jobs.

The jobs data came amid hopes that South Korea's economy could regain its recovery momentum this year, but the economic impact of the new coronavirus is expected to weigh on the economy.

The nation's economy is expected to grow 2.4 percent this year, following last year's 2 percent on-year expansion, thanks to an anticipated recovery in the memory chip sector and a series of policy measures.