JUPITER, United States, Feb. 11 (Yonhap) -- When the St. Louis Cardinals were keying in on South Korean left-hander Kim Kwang-hyun last winter, they saw a career starter who could also fit in as an effective bullpen piece.

It came down to whether Kim would accept the possibility that he could be a reliever with the Cardinals. Being a starter is so glamorous that some pitchers see a move to the bullpen as a demotion to second class. And some free agents that the Cardinals had pursued demanded a guarantee of a starting spot, which resulted in their talks with the club falling through. 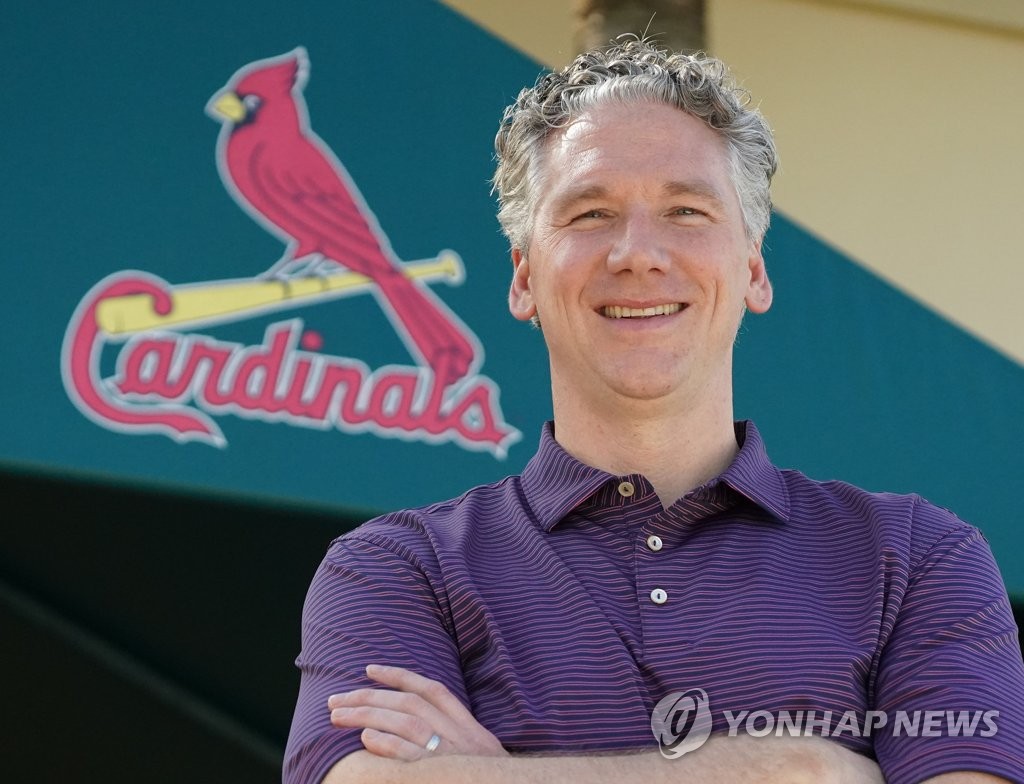 But Kim told the Cardinals that he'd be willing to take on any role, be it a starter or a reliever. And the Cardinals' general manager Mike Girsch said Tuesday that such flexibility on Kim's part "was huge" in getting the two-year, US$8 million deal done in December.

"He could have said, 'No, I am a starter, and I want to be a starter.' But for where we were and what our pitching staff looks like, that would have been a tough fit for us," Girsch told Yonhap News Agency in an exclusive interview at Roger Dean Chevrolet Stadium in Jupiter, Florida, site of the team's spring training. "He understood (our situation). We wanted him to come and try to be a starter. If he doesn't end up being a starter, we do want him in the bullpen. And he was comfortable with that. That was a big difference for us."

The Cardinals, the 2019 National League (NL) Central champions, will be returning four right-handed starters from last year's rotation: Jake Flaherty, Adam Wainwright, Dakota Hudson and Miles Mikolas. The fifth spot is up for grabs, with Kim and a veteran right-hander Carlos Martinez, a former starter eyeing a return to the rotation after closing in 2019, among those battling for the job.

Girsch, who became general manager in 2017 after starting out as an amateur scouting coordinator, said the Cardinals had been keeping tabs on Kim for a few years, and they had a clear idea of what they were getting with the 31-year-old. 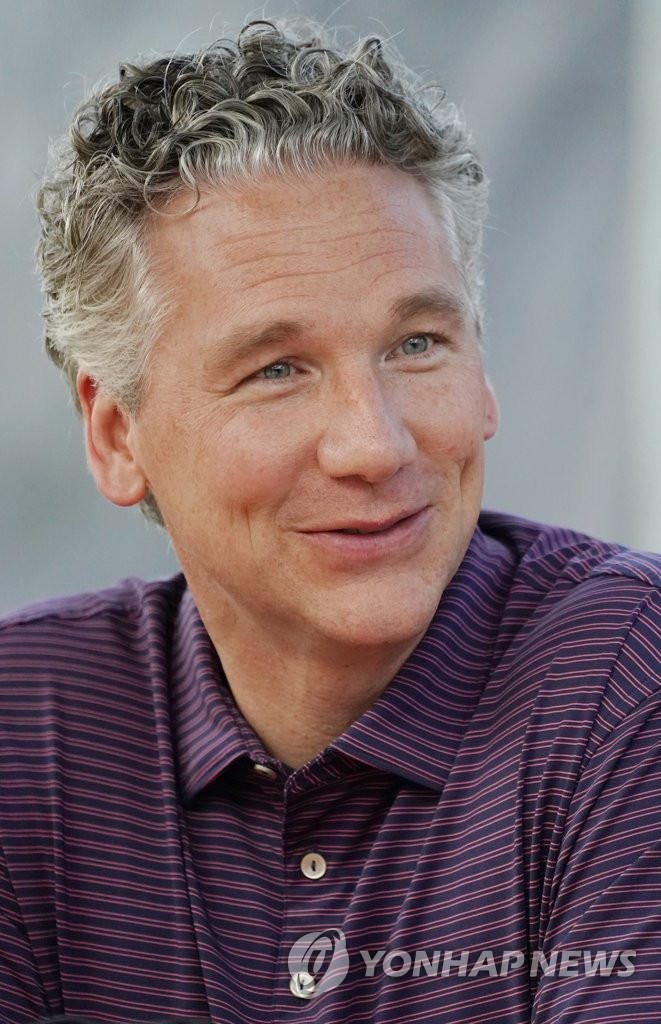 "He gets ground balls. He has a really good slider to complement a good fastball," he said. "The fastball, we've seen up in the mid- to upper-90s (in miles per hour). We think the fastball and slider are the two go-to pitches for him."

For instance, Girsch noted that Kim's walk rate has improved "almost every year, the last four years in a row basically," and his strikeout rates have also gotten better over the years.

The ability to keep batters off the base paths and to sit them down without putting the ball in play should make any pitcher a good fit for any role.

"If he does end up in the bullpen, we feel like (the fastball) might be a real weapon. (Kim is) someone who can throw in the mid-90s with a good slider from the left side," Girsch said. "If he stays in the rotation ... we've seen him hold low- to mid-90s (in fastball velocity) deep into games. He has a curveball and changeup. If he's a starter, he's got complementary pitches he can go back to."

The Cardinals signed Kim after he was posted by his former Korea Baseball Organization (KBO) club, the SK Wyverns, in December. It was the second time Kim was posted for interested major league clubs. Under a different set of rules, Kim was also posted after the 2014 season and had an exclusive 30-day negotiating window with the San Diego Padres. The two sides couldn't come to an agreement, and Kim stayed put in the KBO before finally making the jump to the big leagues this year.

"He's been on our radar for much longer than the average Asian player who ends up coming over, just because of the posting several years ago," Girsch said. "At the Winter Meetings (held from Dec. 8-12), we talked to his agent, and that's when we started to get a little bit of momentum that felt like this might be a fit that would work."

Girsch said Matt Slater, special assistant to Girsch who runs the Cardinals' Asian scouting operations, and another scout saw Kim in South Korea during the summer. The team also had access to video and analytical data that they used to evaluate the pitcher. 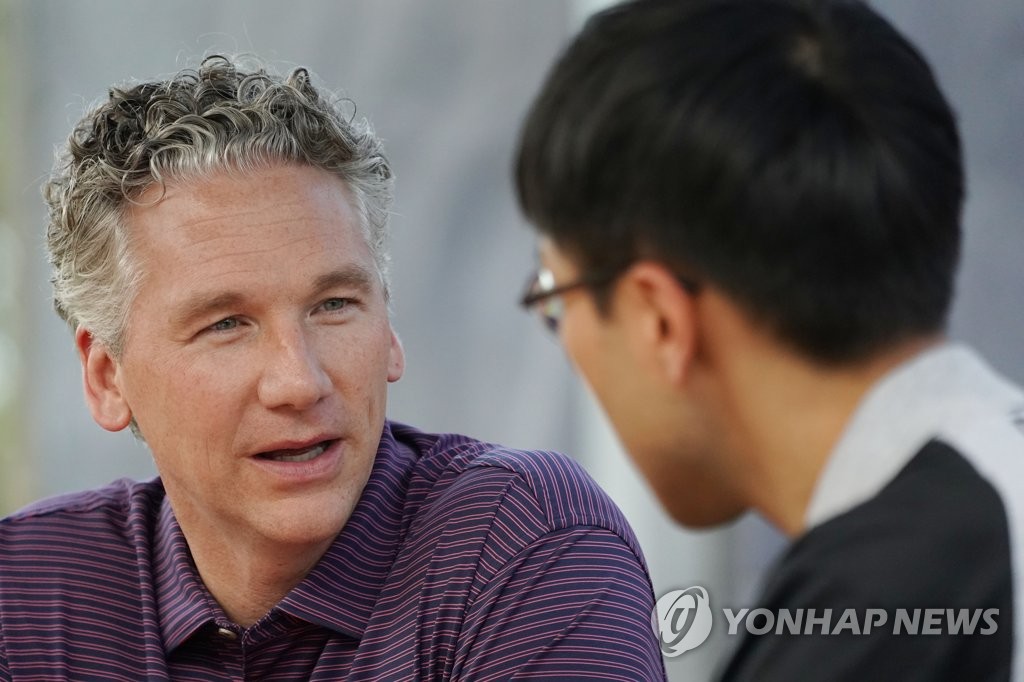 Kim is the second South Korean pitcher to join the Cardinals, after right-handed reliever Oh Seung-hwan, who pitched for the Red Birds in 2016 and 2017. Oh, the KBO's all-time leader in saves, had spent his two previous seasons with the Hanshin Tigers in Japan's Nippon Professional Baseball (NPB). With Oh's success in Japan having carried over to the majors, the Cardinals acquired another former NPB pitcher, Miles Mikolas, ahead of the 2018 season.

And Mikolas' successful transition -- he led the NL in wins and was fourth in ERA in 2018 -- nudged the Cardinals toward signing another Asian league pitcher in Kim.

"A few years prior to Oh, that was when we invested in a little more effort and time and money in scouting in Asia: doing it in person and making sure we had more video," Girsch said. "We feel good about the process we have: a combination of analytics and a few people seeing guys in person and a bunch more video. This puts us in a position where we can make good decisions on people."

Girsch said Kim, who's been assigned an interpreter named Craig Choi, should do just fine with small talk with his teammates. Citing Oh's example during his two seasons in St. Louis, Girsch said Kim should just try to be himself and the rest will take care of itself.

"Between the lines, when the game starts, (Kim) probably will be pretty comfortable. The game of baseball is not that different here than it is there (in Korea)," Girsch said. "The other 18 hours a day that you're not in the dugout, it's a different world. But these six weeks (of spring training) ought to be a lot of fun. Hopefully, he and Craig can get into the flow and enjoy themselves."